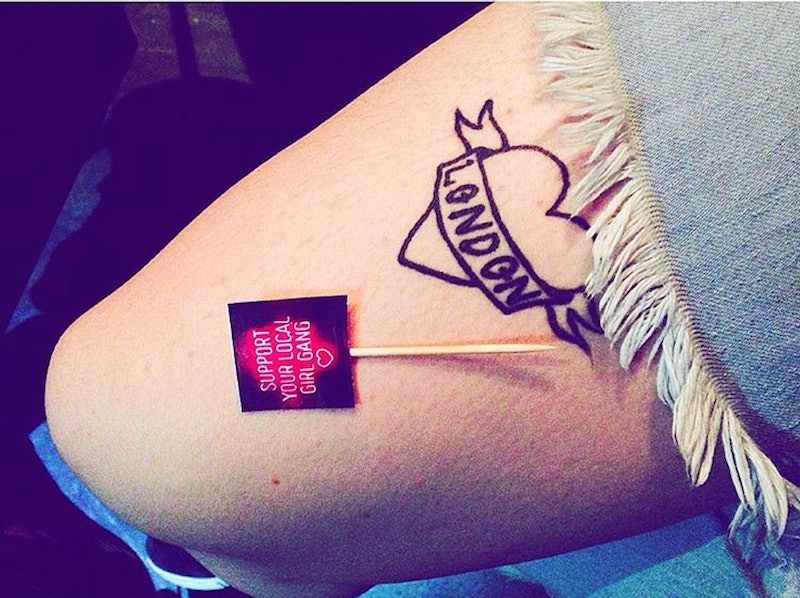 I remember when I first started wearing shorts after having had some work done on my legs. I was wandering past one of my favourite cafes in Homerton, which was on a shortcut back to my old place. A car full of men screeched to a halt beside me, rolled down the window, and said, "I like your tattoos, yeah." It was one of the most shocking moments of my life — I couldn't believe guys were stopping to say something positive about my body. I thought it was a bit of a one-off, but suddenly, I noticed people were far more inclined to want to start conversations about my tattoos.

Generally, most people are positive. And who doesn't like a compliment, right? However, what some people may not consider is that these tattoos are on my body. So what you are choosing to ask or talk to or compliment me about is my body. And occasionally, a more conservative person might be inclined to let me know they don't like and sometimes even hate tattoos, which is just rude. Cheese and crackers, can a girl get a break?

Even my older brother Frank jokes that I have "very middle class tattoos." I think what he means here is that my tattoos, apart from one on my pinky, are largely covered by your everyday, British Isles-weather-defending garb. Then summer rolls round and it's like, hey world look at me — or is it?

There's often a lingering suspicion that people dress or modify themselves for the benefit and attention of others, but for many people, that's certainly not the case. After all, tattoos have been around forever. In March 2018, the BBC reported that researchers found inkings on a 5,000-year-old mummy. Body modification has a long and curious history, and yet to this day, when you have visible tattoos, people often start conversations with you about them or make unsolicited remarks, and I for one am over it.

A recent YouGov study shows that nearly a fifth of UK citizens have tattoos, yet there is still a certain stigma associated with them, especially in the workplace, where it is legal to discriminate against body art. How bonkers is that? Some organisations even have strict policies on visible tattoos. The thought that someone could be judged on their ability to do a job by how they look, as opposed to their skill set and experience, is beyond ridiculous.

Tattoos have been a conscious and liberating journey to reclaim my body and fall in love with it all over again.

But let's be real here, it's the company's loss. A recent report by the Advisory, Conciliation, and Arbitration Service (ACAS) showed that employers who adhere to these outdated rules "risk losing talented young employees." Having largely avoided the corporate working environment, only once have I had a job where I was instructed to keep covered up.

Being asked to cover-up is especially hard because body confidence is something I have struggled with and internally fought for since puberty. I was always lucky enough to be made to feel beautiful at home, but in the outside world, once hair started growing in funny places and I got a little more thick around the middle, things changed. Suddenly, having unpleasant comments from others or reading crappy magazines that told me I was fat became a part of my life. So did stretch marks. Then, there was an ex-girlfriend who didn't want her friends to know about me because I wasn't "hot" enough.

These things all leave indelible scars. The idea of being naked in front of anyone was too horrible to even imagine.

Now, cut to 2018 and my 30th year, where the best part of my day is getting home and getting naked. As I live in shared accommodation and have some bloody decorum, you could call me a bedroom nudist.

That's why, for me, tattoos have never been for other people's benefit or enjoyment. Tattoos have been a conscious and liberating journey to reclaim my body and fall in love with it all over again. If you had told me 10 years ago that one day I would be very body confident and a bedroom nudist (™) I would have laughed you out of the room, and then probably said something mean because I was projecting all that self-hatred out to the world.

Now the only question that remains is, do I feel better about myself and my body because I have tattoos, or is it just a result of getting older and more confident? I think it is a very strong combination of both, with a nice little soupçon of being less shallow and a huge dollop of IDGAF. Please do not get me wrong, the fight for self-love and body confidence is still there. Like many people, I have days and moments when I feel imperfect, or too this, or not enough that. I've just finally gained the ability to spin these feelings and realise that these "imperfections" are what make us all perfectly imperfect, and whatever makes you feel beautiful is your own damn business.