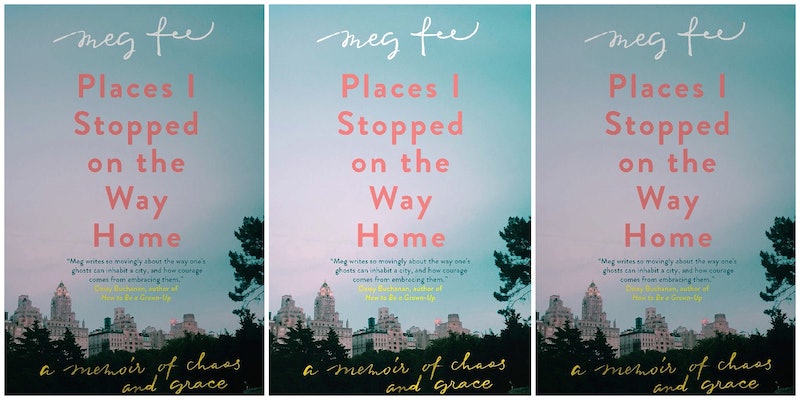 Now at the very tail end of my 20s I can say, with utmost certainty, that all the things you hear about how hard it is to date in a big city are... completely true. Sorry to be the bearer of bad news to anyone out there who, at 22, is still holding out hope that dating in your 20s will be one of the easier things you'll do in this decade. I mean, sure, you might get lucky and stick with your college partner forever. But if you're anything like me — and Meg Fee, author of the new essay collection Places I Stopped On the Way Home — that just won't be the case. But if you ever needed a book that would be both relatable as hell when you're in your lowest dating woes, and act as the most soothing balm for heartbreak, then you need to add this book in your life.

"Sometimes I think of how I will describe New York to my children. I will tell them that the city was in so many ways, and for such a long time, the best and worst thing about my life. That it was a sort of perpetual question in pursuit of an answer. And that in attempting to answer it, I turned and faced myself."

And that in itself becomes the thesis for her debut collection, the thread that holds all of her stories from New York City together — from falling in ill-fated love at Lincoln Center to escaping the roommate from hell on Thompson Street and chasing happiness and fulfillment everywhere from Harlem to Greenwich Village. Fee writes with stunning honesty about everything from her dating misadventures to career struggles to her years-long battle with an eating disorder. And she captures every bit of it with a naked yearning for more, for better, that is at times utterly breathtaking in its simplicity — most especially when it comes to heartbreak, and love, and her life-defining pursuit thereof.

In a passage about a recent break-up, for instance, Fee writes:

"Most days I'm okay. But then I'll be out running errands and a memory will come quickly, quietly. It's always the little things. The wristband of his watch. The book he'd carry in the front pocket of his jacket. His dark brown hair just after a cut. How occasionally he'd remove his glasses, take a breath, and smile as if he was just catching up to himself, his cheeks pink and full beneath the stubble. And for a moment — for just a moment — I'll miss the time it took to cross the nine steps between my front door and where he stood on the sidewalk below."

it is in these small moments captured that Fee's voice truly shines; she somehow manages to turn the mundanity of the every day struggles into something full of meaning, something meant to be explored in the search for clarity. The structure of the book, too, not chronological so much as it hops from place to place — The D Train, 57th & 3rd, Lispenard Street — lends itself to these quiet moments of reflection. Each experience, each relationship, each apartment, is captured as a snapshot, a moment in time leading to another and creating a life. And this life, Fee's life thus far, is offered up not so much as a cautionary tale but as a lesson, one both learned and still learning.

"This is what I now know. This is the cumulative knowledge of my twenties: Give yourself permission to not be good at something. To write messy and imperfect words. To kiss a boy in the bar for no reason other than you want to. To let your legs shake during yoga. Stop apologizing for your height, for wanting to wear heels, for the actual space you take up in the world. Stand up straight. Uncross your arms. Regard as much as you can with awe...Keep going, not because it's easy but because that is what it is to be human— to continuously show up despite the fact that it's hard. You are not the first person to feel afraid, and you are not the first person to feel unworthy, but that is where your story begins, not where it ends. There is no roadmap. There is only faith. The act of it, if not the feeling. Keep going."

And if that's all you truly learn from Places I Stopped On The Way Home, well, maybe that's just about enough.