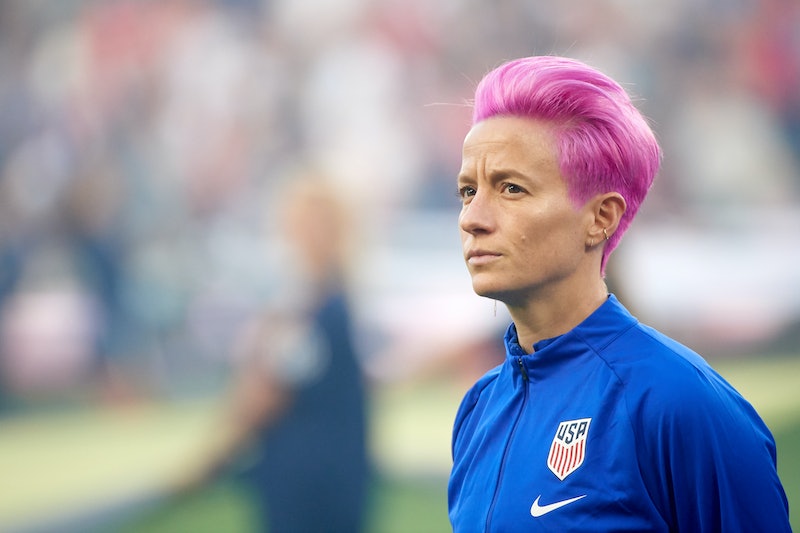 From winning the World Cup to taking home FIFA's Ballon d'Or Award, there's no denying that Megan Rapinoe has had an unforgettable year. That's why it comes as no surprise that she's also been named Sports Illustrated's Sportsperson of the Year for 2019. However, the athlete has also used the year to speak out against racism and gender discrimination in sports. Rapinoe even has a ritual she does during the National Anthem as a way to follow Colin Kaepernick's example in the fight for social justice.

In the cover story for Sports Illustrated, Rapinoe revealed that while she no longer kneels during the anthem, like she famously did back in 2016, that doesn't mean she still doesn't use that time to honor Kaepernick's cause. Instead of kneeling, she now crosses her hands behind her back rather than over her heart, and, sometimes, will take the time to think of people of color who lost their lives from police violence and racial injustice.

"I feel like most people who put their hand over their heart and sing, it’s a totally unconscious act," she explained to Sports Illustrated. But for her, the gesture is no longer a reflex, especially given the politically-charged climate full of police brutality and racial injustice.

Despite using the National Anthem as a time to reflect, Rapinoe sometimes questions whether she should've continued to kneel as Kaepernick did, and what that would've meant for her future in sports. “It’s still something I’m a little conflicted about," she revealed. "I don’t know what would have happened [if I’d continued]. Can you do the same thing without kneeling? Did I make my point? How long do you need to protest?" It's clear that Rapinoe grapples with the question of if she's doing enough to make a difference and evoke change.

The U.S. soccer star has always been open about her political stances and had no qualms discussing her decision to kneel with American Soccer Now back in 2016, as per NBCSports. “Being a gay American, I know what it means to look at the flag and not have it protect all of your liberties,” Rapinoe said at the time. “It was something small that I could do and something that I plan to keep doing in the future and hopefully spark some meaningful conversation around it.”

That plan hasn't exactly worked out the she intended it to, but Rapinoe has consistently addressed Kaepernick's admirable efforts, even thanking him during her Glamour Woman of the Year speech in November, knowing that his political efforts have unfairly damaged his sports career. She said:

The world still has a long way to go when it comes to the fight for equality in regards to race, gender, and sexuality. But with people like Rapinoe and Kaepernick supporting one another and letting their voices be heard, hopefully we'll get there eventually.

More like this
Twitter Is Identifying With Sally Field & Jane Fonda’s Friendship In New Viral Video
By Jake Viswanath
David Beckham’s Controversial Qatar Deal Skyrocketed His Net Worth
By Catharina Cheung
'Breaking Bad' Duo Walt & Jesse Are Back — In This Super Bowl Commercial
By Jake Viswanath
24 History-Making Black Women You Probably Didn't Learn About In School
By Ayana Lage and JR Thorpe
Get Even More From Bustle — Sign Up For The Newsletter
From hair trends to relationship advice, our daily newsletter has everything you need to sound like a person who’s on TikTok, even if you aren’t.