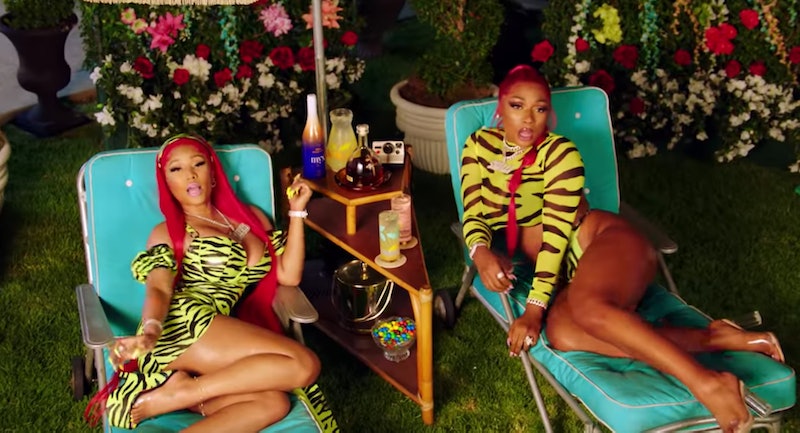 The Munachi Osegbu-directed music video opens with comedian comedian Jaimesha Thomas as she, as reported by Complex, invokes her viral July 30 video where she attempts to channel the essence of hot girl summer in front of a mirror in her room. The relatable sketch then segues to Thomas as she makes her way through the crowded neon-infused pool party where twerking is abound. Both Meg and Minaj are donned in striking neon and animal-print ensembles throughout the upbeat video, which has no shortage of extravagant visuals. (See: the white horse standing poolside as the cityscape looms in the background.)

Megan first unveiled “Hot Girl Summer” on Aug. 9 to critical fanfare. More so, the song debuted at No. 7 on Billboard’s Hot R&B/Hip-Hop Songs and No. 11 on the Billboard Hot 100. The song, born from the rapper’s viral online movement, is rooted in being unapologetically one’s self. At the height of the internet phenomenon, Meg explained to The Root of hot girl summer, “It's about women and men being unapologetically them, just having a good-ass time, hyping up their friends, doing you,” she said. “You definitely have to be a person who can be the life of the party and just a bad b*tch."

As per Refinery29, the movement came into fruition due to Meg’s lyrics “real hot girl sh*t” from her song “Cash Shit” from the album Fever. And, while it has been dubbed hot girl summer, the movement is very much non-gendered and has since emboldened a generation to be unapologetically authentic. "Having a hot girl summer is basically just about confidence,” Meg later elaborated in an Aug. 11 interview with Entertainment Tonight. “Being kind, being the life of the party and just being unapologetically you. You just have to be in love with yourself."

While the video was filled with notable cameos, one megastar is noticeably absent. Given Meg’s recent flute-dancing hangout with Lizzo (documented on Instagram in all its glory), one would have assumed that the flute-playing rapper would have made a cameo. Still, this absence could indicate that another collaboration altogether is at play — and Meg essentially confirmed so much so.

In an interview with ET in August, the rapper revealed that “of course!” a collaboration was forthcoming. “I already know [what the collaboration will be]. And I just can't wait for y'all to hear it,” she told ET at the time. “It's amazing already. Just two Texas girls and we just had a really good time."

September? Autumn? Pumpkin Spice Lattes? All of that sounds like Fall, but Meg's new music video has declared that it's still very much hot girl summer.

More like this
Cara Delevingne Finally Addressed *Those* BBMAs Pics With Megan Thee Stallion
By Brad Witter
Lauv Is No Stranger To Taylor Swift, Drake, Ed Sheeran, & Fame
By Alyssa Lapid
Beyoncé Sent Flowers To “Masterpiece Genius” Madonna After The “BREAK MY SOUL” Remix
By Grace Wehniainen
Who Is Camila Cabello Dating? She's Getting Cozy With Lox Club CEO Austin Kevitch
By Radhika Menon
Get Even More From Bustle — Sign Up For The Newsletter