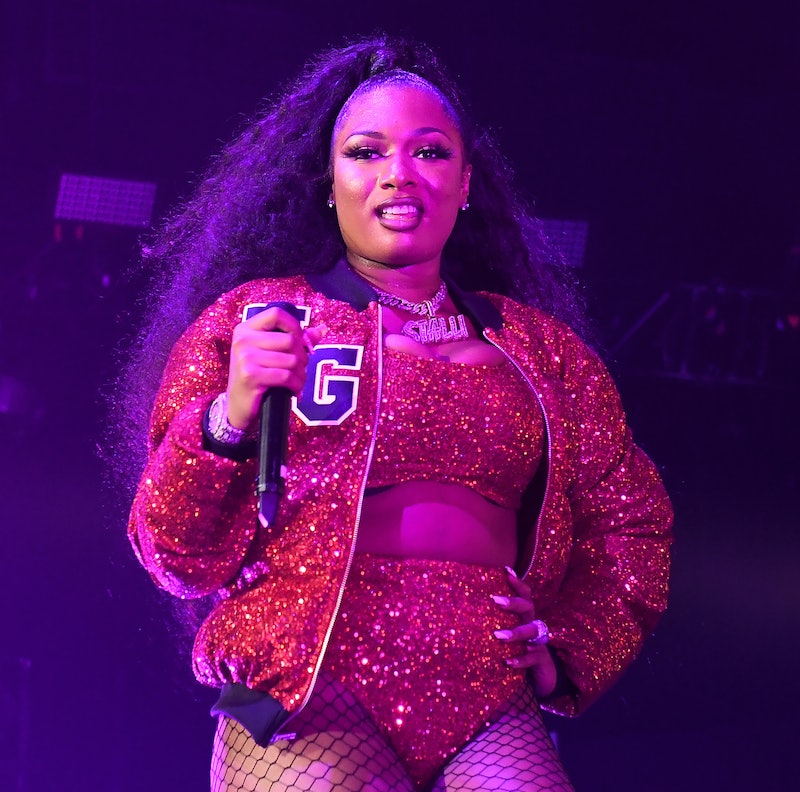 Get ready for "Hot Girl Summer" rapper Megan Thee Stallion to appear on Good Girls Season 3, in what's sure to be a fiery role. The rapper confirmed that she's set to join the NBC show in an Instagram post on Wednesday, Dec. 11. So far, details about who she'll be playing or if she'll appear in more than one episode are being kept quiet, but she made it clear in her announcement that she's excited to be making her TV acting debut on the series.

In her IG video, Megan said, "NBC done let me come on and be on Good Girls. And y'all just need to tune in, and get ready for me!" Her mystery role is just one more accomplishment for the rising star to add to her ever-expanding list of triumphs. Her hit "Hot Girl Summer" became a viral sensation and the unofficial anthem of summer 2019. And in October, she made her official acting debut in trilogy of short films called Hottieween on YouTube. In addition to guest-starring on Good Girls alongside the show's stars Retta, Christina Hendricks, and Mae Whitman in 2020, the 24-year-old is also set to release her debut album later in the year, per NPR.

Even though NBC isn't ready to share details about Megan's Good Girls role, Season 3 is already shaping up to be an intense year for soccer moms turned money launderers Ruby, Beth, and Annie. Season 2 ended with a cliffhanger after Beth shot Rio and left him for dead, and when the show returns on Feb. 16, the trio will be dealing with the fallout.

In addition to Megan, Orange Is the New Black star Jackie Cruz is also joining the show — and she's set to play the mother of Rio's child, Rhea. Beth will strike up a friendship with Cruz's character, which will not only put her in danger, it will also upset her partners in crime. Whether or not Beth actually killed Rio remains to be seen, but as long as her guilt drives her to bond with Rhea, she'll be putting everyone she loves in danger.

Season 3 is set to be the biggest season yet for Good Girls thanks to NBC's expanded episode order. After a 10-episode first season, and 13-episode second season, the third season will have 16 episodes of Ruby, Beth, and Annie digging themselves deeper into the criminal underworld. And with Megan Thee Stallion along for the ride, you can be sure that they're going to be feeling the heat more than ever before.

More like this
Linda Ronstadt’s “Long Long Time” Plays A Pivotal Role In The Last Of Us
By Brad Witter
Hilary Duff's Husband Matthew Koma Has Her Name Tattooed On His Butt
By Jake Viswanath and Stephanie Downs
This 'Emily In Paris' x Blackpink Crossover Is Beyond Iconic
By El Hunt
Taylor Swift Visited The 'Glee' Set For This Bizarre Season 5 Episode
By Grace Wehniainen
Get Even More From Bustle — Sign Up For The Newsletter
From hair trends to relationship advice, our daily newsletter has everything you need to sound like a person who’s on TikTok, even if you aren’t.