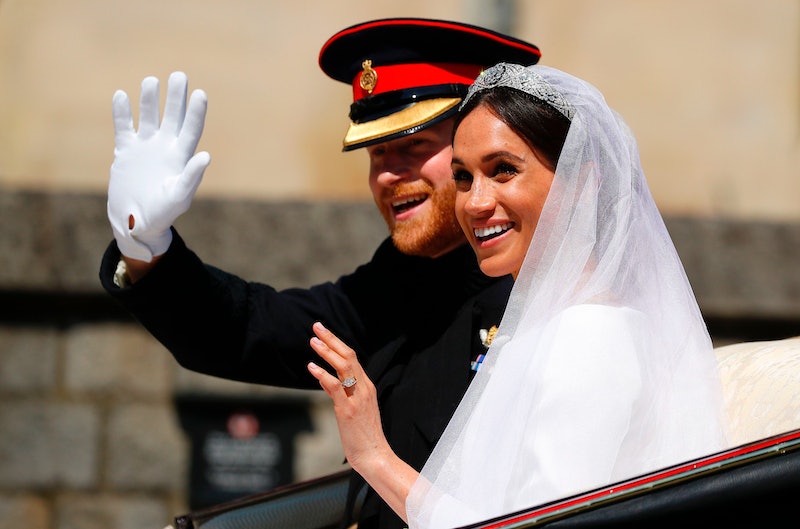 Prince Harry, Duke of Sussex and Meghan Markle, Duchess of Sussex may not live full-time in the United Kingdom anymore, but they're still finding a way to help out his home country in a time of need. Meghan Markle and Prince Harry donated proceeds from their royal wedding broadcast to Feeding Britain, as reported by People on Wednesday, April 15. The couple donated 90,000 pounds, or around $112,000 in U.S. dollars, to the organization.

The funds will reportedly help the U.K. charity provide food for hungry children and continue its mission to end hunger in Britain during the ongoing coronavirus pandemic. A spokesperson for the couple told People that they were "delighted to be able to ensure this money is donated to such a great cause.”

According to the outlet, any excess profits from the BBC broadcast of Meghan and Harry's nuptials on May 19, 2018, were set to be donated to a charity of their choosing. It was estimated that a whopping 1.9 billion people around the world tuned in to watch the royal wedding at St. George's Chapel in Windsor Castle, so you can only imagine how much was earned.

As it turns out, Feeding Britain has more sentimental meaning to the couple, especially Meghan, than people may realize. Archbishop of Canterbury Justin Welby, who also serves as president of the charity, both officiated their wedding and conducted Meghan's baptism. According to Town & Country, they were notified about the funds as U.K. schools were closing due to coronavirus, and thought it was fitting that the profits would go to a cause that's close to the Archbishop and also working toward pandemic relief efforts.

The Duke and Duchess learned about what the organization's pandemic efforts during a visit to Feeding Britain's first citizens' supermarket in January 2019. “The Duke and Duchess were able to speak to the Archbishop recently, and were moved to hear all about the work Feeding Britain was doing to support people during Covid-19,” their spokesperson said. “They have particularly fond memories of their visit to the citizens’ supermarket in Birkenhead, especially the generosity and compassion of everyone working there to help others."

Despite Meghan and Harry's royal exit, which became official on March 31, and move back to her hometown of Los Angeles, they have still made it a priority to continue supporting their existing patronages in the U.K. And surely, this won't be the last time they do so either.