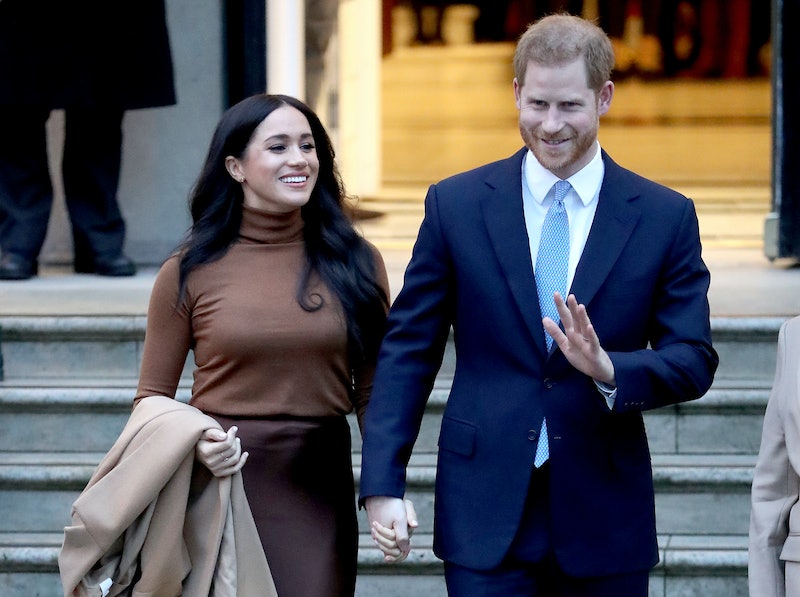 Just one day after Queen Elizabeth announced that the Duke and Duchess of Sussex had reached an agreement with the Royal Family about their plan to step down from their duties, Prince Harry gave an emotional speech about his and Meghan Markle's decision to leave the Royal Family. While speaking at a London fundraiser for his charity Sentebale on Jan. 19, Harry explained that he felt there was "no other option" than to step down in order to serve the best interests of his wife and son, Archie.

Harry began his speech by thanking the charity — which was founded in 2006 in honor of his mother, Princess Diana, to support young people in Southern Africa who have been diagnosed with HIV — for supporting both him and Meghan over the years. "I have grown up feeling support from so many of you, and I watched as you welcomed Meghan with open arms as you saw me find the love and happiness that I had hoped for all my life," Harry said. "I also know you've come to know me well enough over all these years to trust that the woman I chose as my wife upholds the same values as I do. And she does, and she's the same woman I fell in love with."

He continued, explaining that both he and Meghan were "hopeful and excited to serve" the people of the United Kingdom after their wedding, but that the current circumstances made it impossible for them to continue on as Senior Royals. "The decision that I have made for my wife and I to step back is not one I made lightly. It was so many months of talks after so many years of challenges," he explained. "And I know I haven't always gotten it right, but as far as this goes, there really was no other option."

This comes one day after the Queen released a statement explaining that as of the spring of 2020, Harry and Meghan will give up their royal titles and will no longer formally represent Queen Elizabeth or receive public funding. Harry touched on those terms in his speech, noting that he had hoped to "to continue serving the Queen, the commonwealth, and my military associations, but without public funding," but that "unfortunately, that wasn't possible."

"I've accepted this, knowing that it doesn't change who I am or how committed I am [to my duties]," he continued. "But I hope that helps you understand what it had to come to, that I would step my family back from all I have ever known, to take a step forward into what I hope can be a more peaceful life." Harry also stressed that regardless of the new agreement with the Queen, he and Meghan plan to continue supporting the causes they care about. "I will continue to be the same man who holds his country dear and dedicates his life to supporting the causes, charities and military communities that are so important to me."

While he didn't explicitly reference the reports of a rift between himself and Meghan and the rest of the Royal Family, Harry seemed to put those rumors to rest by thanking his family for their support as they came to their decision. "I will always have the utmost respect for my grandmother, my commander in chief, and I am incredibly grateful to her and the rest of my family," Harry said.

It remains to be seen what impact Meghan and Harry's decision to step back from the Royal Family will have on Buckingham Palace, but the Duke of Sussex made it clear that he's putting Meghan and Archie above all else.