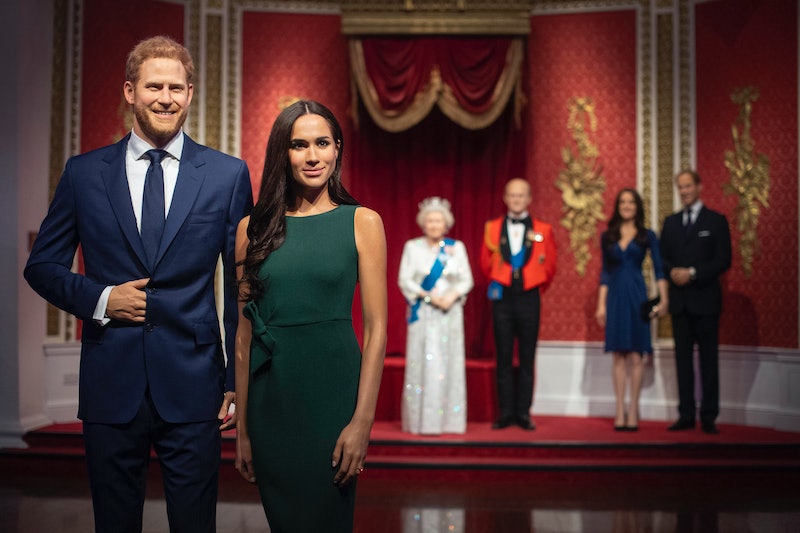 The news that Meghan Markle, Duchess of Sussex, and Prince Harry, Duke of Sussex, are stepping back from their royal duties continues to have quite the impact, including on Madame Tussauds. Meghan and Harry's wax figures were removed from the royal family display in both London and New York City, CNN reported on Thursday, Jan. 9. This means, Queen Elizabeth II, Prince Philip, Prince William, and Kate Middleton's wax figures now stand together, separate from the new parents.

Steve Davies, the general manager of Madame Tussauds in London, said in a statement released to CNN that they're simply "reacting to the surprising news" Meghan and Harry dropped on Wednesday, Jan. 8. "From today, Meghan and Harry's figures will no longer appear in our Royal Family set," Davies continued. Though he noted that they would still be on display, saying, "As two of our most popular and well-loved figures they will of course remain an important feature at Madame Tussauds London as we watch to see what the next chapter holds for the them."

Davies also made it clear that despite them now being separated from the royal family display, Harry and Meghan's removal reflects their "progressive new role within the Royal institution."

The same can also be said for the statues at the New York location, where Meghan and Harry's wax figures will be moved to another area. Brittany Williams, a Madame Tussauds New York spokesperson, said in a statement given to CNN, "We look forward to spending more time with the couple in North America and we will continue to watch to see what the next chapter holds for them."

On Wednesday, Meghan and Harry released a shocking statement on Instagram stating that they would "step back as 'senior' members of the Royal Family." The couple then went onto say that they plan "to become financially independent" and will split their time "between the United Kingdom and North America." They also explained that they would "continue to honour our duty to The Queen, the Commonwealth, and our patronages," all while continuing "to collaborate with Her Majesty The Queen, The Prince of Wales, The Duke of Cambridge and all relevant parties."

Following Meghan and Harry's announcement, Buckingham Palace released this statement: "Discussions with the Duke and Duchess of Sussex are at an early stage. We understand their desire to take a different approach, but these are complicated issues that will take time to work through." It sounds like Meghan and Harry's wax figures could be in Madame Tussauds limbo for a while.