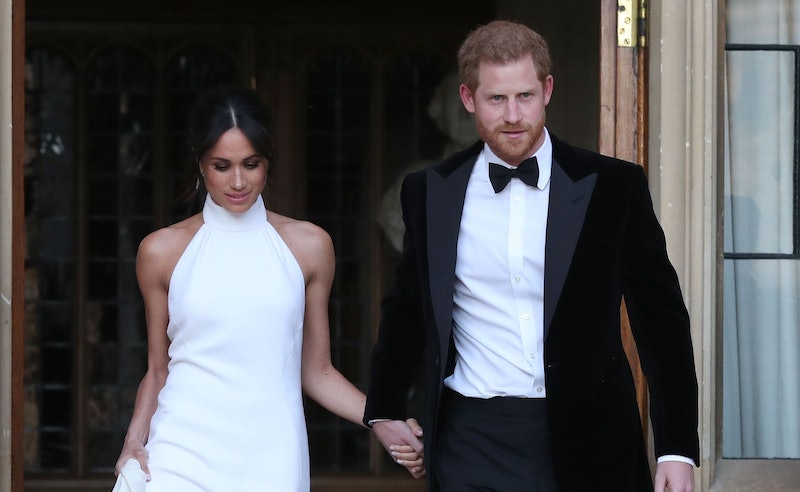 Meghan Markle and Prince Harry married on May 19, 2018 in front of a jam-packed crowd full to the brim of fellow royals and celebrities pals. The event was televised to an estimated 29 million viewers, solidifying its place as one of the most important moments in British royal history. The couple just celebrated their the second year of their marriage, and according to PEOPLE magazine, Meghan and Harry's two-year anniversary gifts were especially creative this year.

A source has revealed to the publication that the pair like to follow the traditional anniversary gifting rules but with a unique, modern twist. For example, in year one, in line with tradition their gifts were based paper based, so "Meghan wrote out the wedding speech and had it framed." Cute!

Year two is cotton, and the source predicted the couple would again get creative with their gifts. "This year, they both gave each other gifts based on 'cotton,'" they said. "Undoubtedly, it was a very creative and romantic gesture as all their gifts are to one another."

Speaking about the symbolism behind cotton, UK wedding website Hitched explains it "is made from lots of thread woven together and the longer you are married the more your life becomes intertwined."

But how exactly did the two spend their special day this year? According to PEOPLE, it was all about keeping things low key and being with their son Archie, who just celebrated his first birthday. "Today [May 19] the family is spending a quiet day together," the source explained.

Another source echoed these sentiments when they told Page Six: “They’re laying low, taking the day to relax and be together with no distractions. No work. No calls. Just family time and keeping it simple.”

More like this
Courteney Cox & Laura Dern Proved Their BFF Status With Matching Tattoos
By El Hunt
'Love Island' Has Added Yet Another Bombshell To The Villa
By Bustle UK
4 Surprising Celeb Throuples That Got The Internet Talking
By Sophie McEvoy
Every Season Of 'Love Island' Ranked Best To Worst
By Alice Broster, Frances Stewart and Sophie McEvoy
Get The Very Best Of Bustle/UK
Sign up for Bustle UK's twice-weekly newsletter, featuring the latest must-watch TV, moving personal stories, and expert advice on the hottest viral buys.