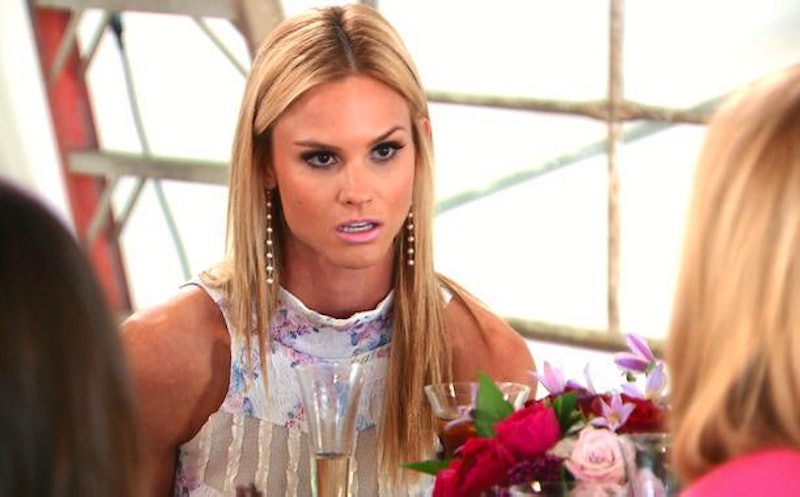 There could be upsetting news for Real Housewives fans. Fan favorite Meghan King Edmonds is not returning to Real Housewives Of Orange County for Season 12 of the Bravo show, according to Us Weekly sources. Bustle has reached out to Bravo for comment, but did not immediately receive a response. King Edmonds was a cast member on Seasons 10 and 11 and had been a welcome addition to the Real Housewives family. The star famously married former Major League Baseball player Jim Edmonds in Oct. 2014, and the show followed the couple's relationship and the birth of their first child together. Following a struggle with IVF treatment, viewers avidly watched their journey to start a family.

According to US Weekly, several sources have confirmed the news that King Edmonds is leaving The Real Housewives Of Orange County, but didn't provide a reason for the decision. Apparently, the cast is yet to be finalized for Season 13, so the news of the departure of her comes ahead of any major announcements about the series. It's very possible that the birth of baby Aspen King Edmonds has contributed to the family's possible decision to leave the show, now that their priorities have changed. As well as the expansion of their family, the star has several other projects on the go, including writing for Celebrity Baby Trends, meaning that she will still be incredibly busy.

King Edmonds's likability and honesty has helped her to build a loyal fan base, which includes over half a million Instagram followers. With Aspen in tow, she has also begun to expand her brand to include all things baby, and it's likely that her career will continue to utilize her new role as a mother. The Real Housewives star has several business ventures, including #Hastag Hats, which she created and promotes.

As a passionate activist, King Edmonds also supports a number of charities, including Fight Colorectal Cancer, and 3Strands Global, which combats human trafficking. We'll definitely be hearing more from the reality star, and it'll be exciting to see whatever she decides to do next if these rumors are true.