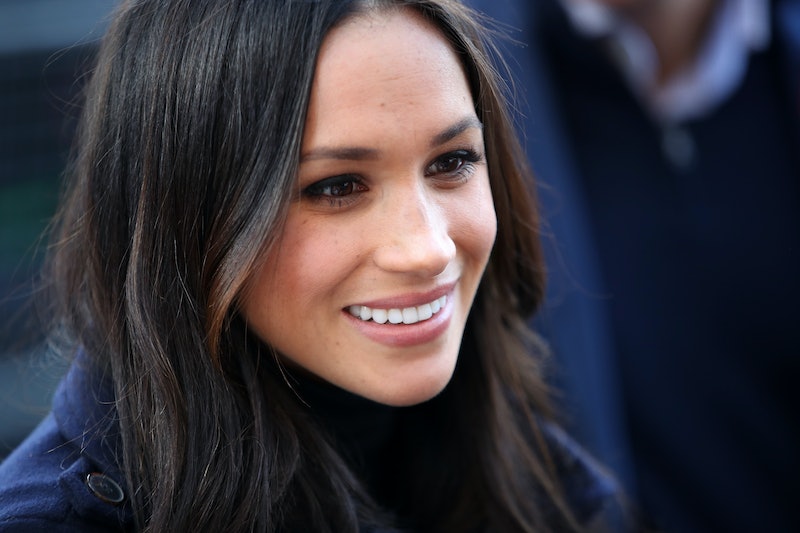 Her entire life has changed drastically, but it appears that Meghan Markle can still work and run a business once she marries Prince Harry. According to TMZ, who reportedly spoke with "palace sources", just because the former Suits actor is marrying into the British Royal Family doesn't mean she can't pursue an outside career. TMZ also reports that there is no law in the U.K. preventing a royal family member from having a business, in addition to their royal duties. So, if Markle wanted to start a business or partner with someone, she reportedly can do exactly that. (Bustle reached out to Kensington Palace for comment, but did not receive an immediate response.)

It's unclear if running a business is in Markle's future or something she's been thinking about, but don't put it past her. The 36-year-old future royal is a hard worker. From starring in seven seasons of USA's Suits to once running her own lifestyle blog called The Tig, Markle is ambitious. And when it comes to her new life as a royal, she seems pretty excited about whatever comes her way. Whether that be giving back philanthropically or working in a specific industry, Markle is ready for what's ahead.

As she told BBC during her first interview with Harry in November 2017 about "giving up" her acting career, "I don't see it as giving anything up, I just see it as a change. It's a new chapter." There's always a chance her "new chapter" will include having a business on the side. As reported by TMZ, there is no "royal protocol" preventing Markle from pursuing business opportunities.

In November 2017, Hello! Canada's editor-in-chief, Alison Eastwood, told the Toronto Star about whether or not Markle can or will still act, "There’s no royal decree stipulating that once you become a member of the Royal Family, you must forgo other professional activities." The same can possibly be said of Markle becoming her own boss by starting a business.

But, as Eastwood continued, "It’s not written in the royal rule book, but the fact is it becomes completely unpractical to sustain once you are a working member of the Royal Family. We’ve seen it time and time again. The level of scrutiny and security alone really make it prohibitive." Whether Markle's royal status and other duties would affect another career opportunity remains unknown.

The fact that Markle is done with acting could mean she'd be willing to give a different area of work a shot. Though, it seems like she's more focused on working with Harry at this point in time. She told BBC about leaving Suits, "And, for me, once we hit the 100-episode marker, I thought, 'You know what, I have ticked this box and I feel really proud of the work I've done there and now it's time to, as you said, work as a team with [Harry]."

But, if she were willing to give it a shot, it seems like a possibility. For example, Sophie, The Countess of Wessex (she's married to Prince Edward, Queen Elizabeth II's youngest son), continued to work after marrying into the royal family. "I am rare because I am one of the few ladies in the British Royal Family who has had a professional business career and their own company," she said in November 2015 (via the Daily Mail). Sophie had her own PR business, RJH Public Relations. According to Biography.com, she and Murray Harkin founded it in 1996, but Sophie left the company in 2002 to start a family. As reported by The Guardian in April 2003, there seemed to be some scandal surrounding the public relations firm, as well.

According to People, Prince Edward, the Earl of Wessex, also tried to have a "non-royal career" by taking on the role of a production assistant at Andrew Lloyd Webber's Really Useful Theatre Company in 1988. In March 2002, The Guardian reported about Edward, "He would make a proper professional living, the first senior member of the royal family to do so, as a theatre producer." Per People, both Edward and Sophie chose to leave their careers in 2002 (they married in 1999) "to focus on royal duties full-time".

A member of the British Royal Family working after marriage isn't anything new, so the chances of Markle choosing another career path while married to Harry is totally plausible. It will just be up to her if she chooses to do so.