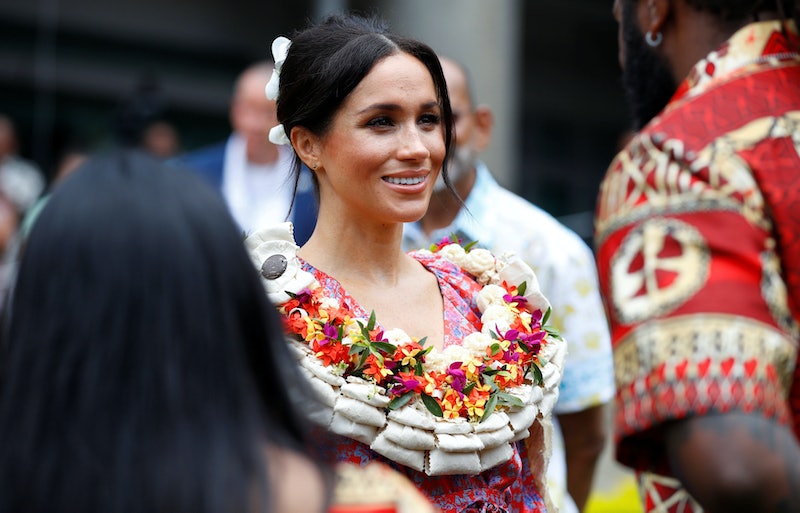 Take a look at any of the photographs from Prince Harry and Meghan Markle’s public engagements and you’re like to see thousands of people, decked out in royal regalia and holding up signs for the pair to see. There’s no denying that the modern couple are super popular, and unsurprisingly, they have a hard-working team that works to keep them safe as they pass through crowds. While at an event in Fijian market, a security risk saw Meghan Markle rushed away from the venue, cutting her visit short. So, what actually happened?

Meghan Markle was at Suva Municipal Market on Wednesday to meet a number of women who are part of the UN Women’s ‘Markets for Change’ initiative. According to Associated Press, she was expected to spend around 15 minutes exploring the covered market and chatting with the female vendors. However, around halfway through the visit she was pictured talked worriedly with her security detail and was then rushed from the venue.

A representative for Kensington Palace told the publication that the Duchess' team had “concerns about the large crowd that came to greet her in the relatively confined space”. They explained that “crowd management issues” were the reason why her detail asked her to leave.

Although many were understandably disappointed the Duchess couldn’t be around for longer, Kensington Palace told The Sun, "Meghan met with everyone she was scheduled to.”

Suva Municipal Market is a covered market housed in a gigantic warehouse, which houses “approximately 3500 vendors” according to the official website. The stalls sell everything from seafood, to fresh fruit to tobacco leaves, making it a colourful, if not crowded, experience.

A source described the scene to The Sun, “There were much bigger crowds than people had been anticipating and there were a lot of people cramped into the market.”

“Before entering the market where there were scores of people all cheering and waving inside with their phones held up to record. Meghan leant over and whispered into the ear of one of her aides,” the source said.

Another source told the Mirror that the Duchess seemed out of sorts, “When she got into the market she looked really disengaged, not her usual self at all," the source said. "She stopped to speak to a pineapple seller on one of the stalls and had a very blank and disengaged look on her face, which is very unlike her.”

They added, “It was very hot and humid in there so perhaps it wasn't the best environment for a pregnant woman.”

As for Prince Harry, according to AP he was not scheduled to join Meghan Markle at the Suva marketplace and instead was off “unveiling a plaque at a forest site”. The pair are on day nine of sixteen of their royal tour, just over than halfway through. Earlier on Wednesday, Meghan Markle gave her first speech of the visit at the University of the South Pacific.

She announced the creation of two new grants to Fiji National University and the University of the South Pacific, which are specifically aimed at empowering their female staff. The Duchess also talked about her own university experience, saying, “It was with scholarships, financial aid programmes and earnings from a job on campus that went directly towards my tuition that I was able to attend university and without question it was worth every effort.”

Say it louder for the people in the back, Meghan.

Meghan and Prince Harry will be leaving Fiji tomorrow to head off to Tonga, where they’ll rub shoulders with the Tongan royal family. From there, they’ll return to Sydney for the end of the Invictus Games before zipping off to New Zealand for the final leg of their tour. TBH, it sounds like my dream trip and I’m just casually going to be over here working through some serious travel envy.