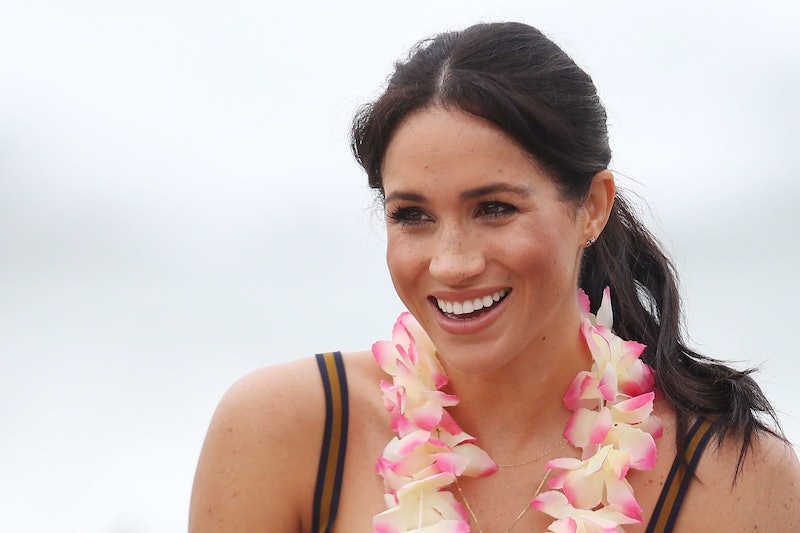 Marke Markle, Duchess of Sussex, has had quite an eventful few days this week with a jam-packed visit to Australia, and the small matter of announcing the pregnancy of her first child. With a busy schedule full of royal duties and some presumed jet lag, it's understandable that the mother-to-be might feel a tad worn out. However Meghan Markle is practicing yoga to help combat her tiredness, and apparently, it's working wonders for the royal mother-to-be.

Whilst meeting with royal fans on Bondi Beach, Markle spoke with 35 year-old Charlotte Connell, who is is currently 23 weeks pregnant, reports the Daily Mail. When discussing her interaction with the duchess, Connell said: "Meghan told me that pregnancy was like having jet lag. She said she was up up at 4.30 a.m. this morning doing yoga in her room as she couldn't sleep. It’s a bit of a double whammy for her, as she has both the baby and the jet lag to content with."

The royal fan appeared to relate to Markle's struggle with regards to tiredness. She added: "We both talked about how you feel jet lagged even though you have not travelled anywhere. Even in her jet lag she got up to do yoga this morning at 4.30 a.m. Physical activity like yoga and surfing is so good for healing your mind."

The expectant mother was visiting the popular tourist spot alongside her husband Prince Harry, Duke of Sussex. The royal pair met with a local surfing group known as OneWave, which aims to raise awareness for wellbeing and mental health in an engaging way, reports Hello! magazine. Markle and Harry also took part in a session known as "Fluro Friday" in which people share their own experience with mental health issues.

The duke and duchess also took some time to visit Macarthur Girls High School during the fourth day of their royal visit, where the couple set out to encourage female empowerment. Whilst at the school, the royals spoke to teenagers about equality and feminist issues, and Harry, who is said to identify as a feminist, expressed how he wants to see men join the fight for full equality. When discussing how men can assist in promoting female empowerment, the prince said "Men can help as well by getting involved, we have to. We need to get men's voices involved as soon as possible", reports the Daily Mail.

Markle, who has been unapologetically outspoken of her support for women's rights has added a feminist manifesto on the official Buckingham Palace website, and spoke emotionally to the students about the work they have been doing. She said: "You guys all remind me so much of myself when I was growing up. I went to an all girls school which was incredibly diverse as well. I think being around such empowered young women, it becomes something that you all just grasp onto to understand your world". The duchess also offered some words of encouragement for the onlooking schoolgirls, when she added: "It's made you confident, well-spoken. You have an intention set to really do something to change the world, and you have to keep it up. It makes me so emotional. You're doing really, really good work and I'm so happy that we're here. We give you our full support".

Witnessing a powerful figure like Markle be an advocate for such important issues, whilst being fully supported by husband Harry, is one of the many reasons this royal couple are fast becoming my favourite. Keep up the good work.

More like this
What We Know About Lilibet Diana's Godparents
By Frances Stewart
Ryan Reynolds Brought Some Famous Friends To Wrexham A.F.C's Last Game Of The Season
By El Hunt
10 Times Diana & Meghan Spoke Similarly On The Royal Family
By Sophie McEvoy
Jake Daniels Just Became The UK’s First Active Football Player To Come Out As Gay Since 1990
By Sam Ramsden
Get The Very Best Of Bustle/UK