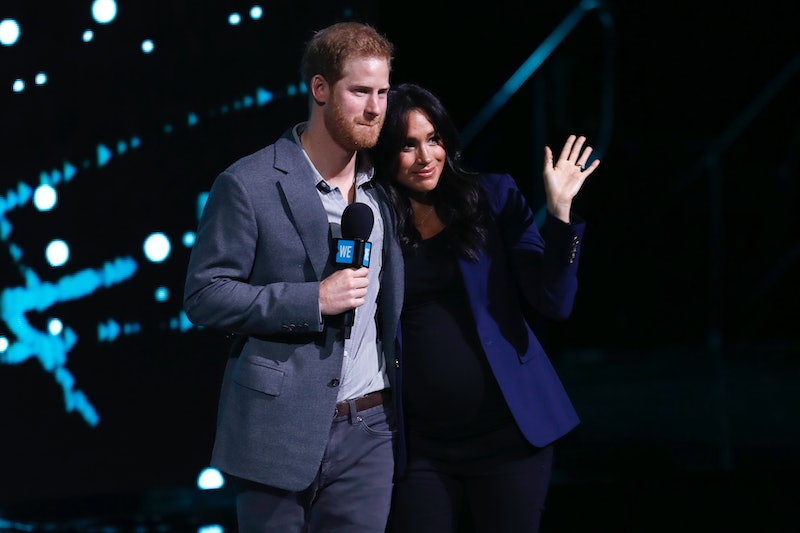 If you're a fan of the royals, there's nothing like a surprise appearance from a Duchess. And Meghan Markle's recent one filled fans with glee. Pretty much everything from her chic maternity ensemble to Harry's heartfelt speech had audiences delighted, but most notable was Meghan Markle and Prince Harry's cute behaviour on stage. It was giving me allll the feels, and I bet it will for you, as well.

First things first, let's set the scene; The Duke of Sussex was at Wembley to celebrate WE Day UK, a local initiative that encourages young people to take part in positive social change. Harry was appearing in front of an impressive 12,000 students and teachers, all of whom had done something positive in their local communities.

The Prince was in attendance in his capacity as President of The Queen’s Commonwealth Trust, and addressed the students and teachers in the audience, praising them for their actions: “To be amongst all of you progressive, motivated, open minded, change-makers, is what gives me hope for the future."

“Your optimism is inspiring – you see opportunities where other people see challenges; you seek solutions when others just focus on problems. You are the most engaged generation in history. You care about values, doing the right thing, and championing the causes that will shape your future," he said.

He continued: “You don’t judge someone based on how they look, where they’re from, or how they identify. In this room, you see the world for what it is – vibrant, colourful, mixed and full of promise. That is who you are, and that is what makes me feel proud to stand in your presence as you tackle the world’s greatest issues. And you guys know as well as I do, we’ve still got so much to do.”

Near the end of his heartfelt speech, Harry had a little surprise for audiences, bringing on his wife Meghan as the room unsurprisingly erupted into jubilant cheers.

“I’m now going to drag my wife on stage," he told the audience as he took her by the hand. After hugging and putting their arms around each other, Harry finished by saying, “I am with you and we are with you. Get to work.”

Alongside Harry's inspiring words, it was arguably the lovely tactile nature and lingering looks between the couple that caught most people's attention.

Meghan, who was wearing a black top under a blue blazer, stared admiringly at her husband as he spoke, clearly proud of his appearance on stage.

The pair were essentially the definition of couple goals, and I predict this is only going to get a whole lot cuter after the pair welcome their baby to the world in coming months!

Also at the WE Day UK celebrations giving special performances and speeches this year were singers Nicole Scherzinger and Pixie Lott, and model Naomi Campbell.

You can learn more about WE day on their website, including the stories and students that have inspired the movement.