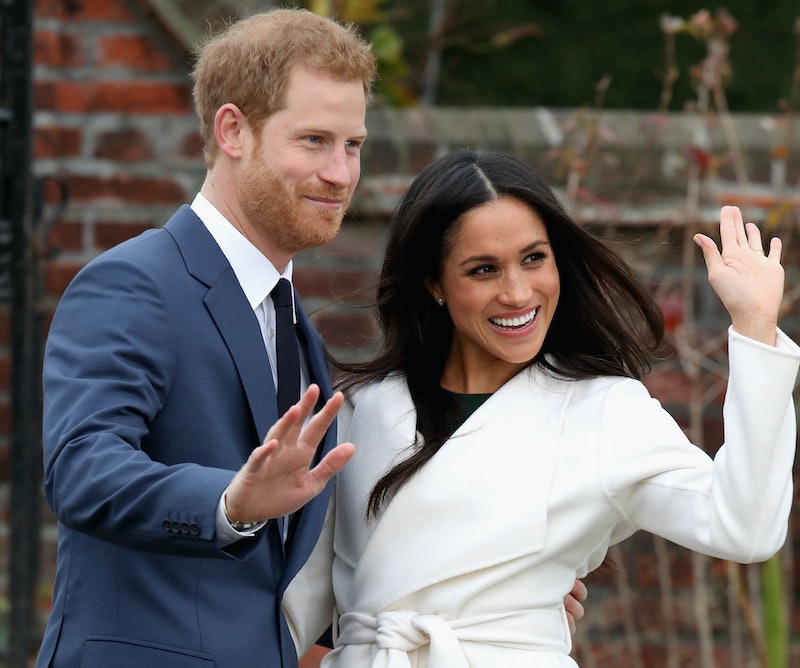 They're both smart, beautiful and in love with a British prince. But are Meghan Markle and Kate Middleton friends? With this much in common, you'd assume so. Prince William and Middleton's reaction to the happy news also suggested the royal couple feel warmly about the actor. In a statement released on November 27, they said "We are very excited for Harry and Meghan. It has been wonderful getting to know Meghan and to see how happy she and Harry are together."

It sounds like Middleton and Markle will have more common ground than just their husbands. For one thing, according to the royal press statement on the engagement, Markle will live in Nottingham Cottage in the grounds of Kensington Palace — according to The Daily Mail, this is the same cottage that Prince William and his wife lived in when they were first married.

The tabloid also speculated that the pair are house hunting for something more permanent in Norfolk "close to the Duke and Duchess of Cambridge's home Anmer Hall." If this was true, presumably this would also signal that the two women like each other enough to want to live in a close proximity to one another.

The rumors certainly suggest so. According to Grazia in October 2016, Middleton and Markle may have met each other while the actor was visiting London and they cite an unnamed source as saying "William and Kate really liked her and she fitted in straight away." Hello! also reports that the pair previously met at Pippa Middleton's wedding in May 2017.

Of course, it would make sense if the pair were friends, since they have plenty of interests in common. According to Shape, Middleton has been sporty ever since high school, when she ran cross country, played tennis and field hockey and swam and Shape reports that she still plays tennis and skis. It's a similar story with the Suits star, who told Best Health Magazine Canada that yoga is "my thing" since her mother is a yoga instructor who "started doing mommy-and-me yoga with her when I was seven." In the same interview, she explained that while she didn't run as much as she used to, she wanted to run a marathon.

Perhaps this is something the two women could do together to raise money for one of the many charities they invest their time in? Because they also share a passion for philanthropy. According to Vanity Fair, Markle was interested in charity work long before meeting the prince. She was appointed as a global ambassador for humanitarian aid organization World Vision and has worked for the UK-based charity One Young World. The same article explains that the 36 year old has quit Suits in order to focus full time on her charity work and is thinking of setting up a charity focusing on vulnerable women — this would make sense since she also works as a women’s advocate for the United Nations.

Middleton also has a big heart, with the International Business Times reporting that in the run up to her 30th birthday, she carried out extensive research on charities and decided to support four: The Art Room (which helps cultivate confidence in children through art), London's National Portrait Gallery, East Anglia's Children's Hospice, and Action on Addiction, a charity which zeroes in on helping addicts and their offspring. As such, potentially Middleton will be able to advise the Los Angeles native on charities that may need extra support.

Given the wealth of things the pair have in common, while there's no official proof that the two women are friends just yet, it feels like it's probably a matter of time. With their passion for sports and charities, their closeness in age (Middleton is just under five months younger) and the fact that they'll soon be based in the same country and maybe even the same area, let's call this: they're going to be friends soon if they're not already.