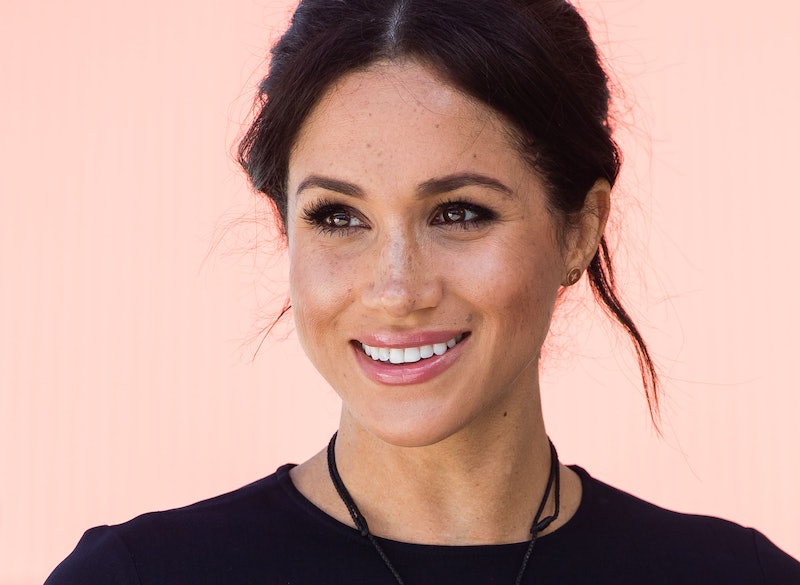 Nothing unites the nation more than the arrival of a royal baby, and the news that Meghan Markle, Duchess of Sussex, is expecting came as some welcome light-hearted news in a deeply divisive political landscape. But when is the Duchess' due date? Well, according to recent reports, Meghan Markle and Prince Harry's baby may be due sooner than you might think. Although no exact date had been provided by the royals themselves, Meghan has previously been predicted to give birth in March or April 2019 based on the fact the initial statement from the royals said the couple were expecting in "Spring 2019."

However, according to Hello! Magazine, a more accurate potential due date has emerged, thanks to amateur photographer Karen Anvil. Markle reportedly spoke to Anvil on Christmas Day, and during a conversation about the Duchess' due date, Meghan revealed that she is "nearly there" with her pregnancy. In addition, Anvil tweeted sharing that "Meghan said she was excited, there wasn’t long left to go."

Shortly after the royal church visit at Sandringham the photographer shared her excitement on social media. In a post on Twitter, she said "Got the most beautiful photo today, I can’t wait to show you all. I even got to speak to Meghan about the baby." Previously, Anvil has managed to capture some incredible royal snaps, her most notable being of Price William, Kate, Harry, and Meghan arriving at church on Christmas Day last year.

Recently, the expectant mother has endured weeks of difficult news coverage, with many reports suggesting a contentious relationship between herself and sister-in-law Kate Middleton. However, the pair's appearance at this year's royal family Christmas Day church service has most definitely put those negative rumours to rest. Whilst at St Mary's Magdalene in Norfolk, Middleton and Markle shared a moment of embrace in front of the onlooking public and photographers — and has since quickly gone viral online. Body language expert Judy James also told the Daily Mail that "they're walking in step, and there's enough mirroring to suggest like mindedness too."

As reported by Hello! Magazine, Harry and Meghan spent their first Christmas as a married couple with the entire royal family, including the Queen herself, at Sandringham. William and Kate reportedly opted to stay at their country home in Norfolk, known as Anmer Hall, which is conveniently just a short distance from St Mary's Magdalene church, which is actually based on the Queen's Sandringham Estate.

Another notable royal festive event was of course the Queen's annual Christmas Day message. During her speech, the Queen addressed the deeply divided political and social climate, and used elements of her christian faith, referencing "peace on Earth and goodwill to all," to relay a message of positivity to the millions watching around the world. The monarch also touched upon the upcoming birth of the royal baby, who will become her sixth great grandchild, and joked that family events including the wedding of Prince Harry and Meghan, have kept her "well occupied" this year.