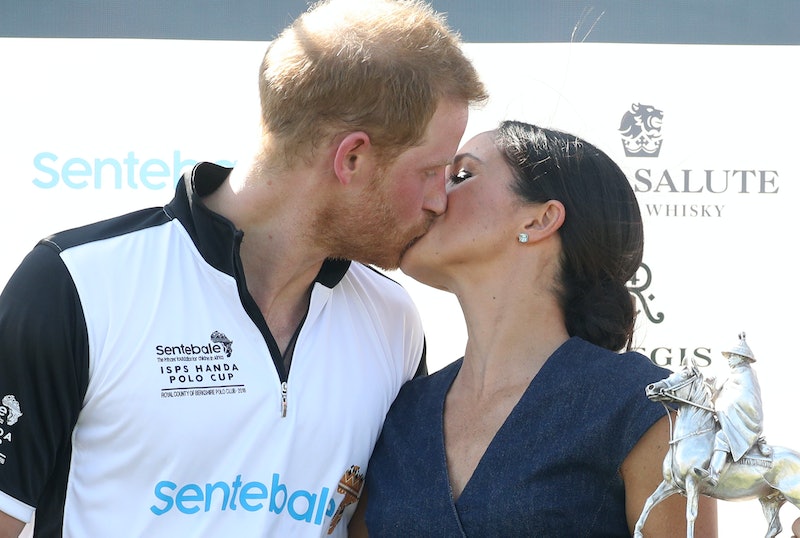 The Duke and Duchess of Sussex have to be one of the most exciting Royal pairings in recent history. Aside from Meghan Markle being an inspiring actress with a successful career and history of important humanitarian work — and their May wedding providing a welcome shake-up to Royal — their obvious attraction for one another and down-to-earth approach is refreshingly modern, not to mention is an absolute joy to see. Which is why Prince Harry and Meghan Markle's kiss at the Sentebale Polo Cup on Thursday got me feeling all warm and fuzzy inside.

The couple has become known for their PDAs. Whether it's linking arms and holding hands or gazing lovingly into each others eyes, they never miss an opportunity to show their love. And the pair's most recent official outing was no different. Despite rumours that now they're an official royal couple they've had to tone things down a tad, they engaged in a very public, ultra-romantic kiss. But what did the rom-com-worthy embrace tell us about Meghan and Harry's relationship? I spoke to body language expert Judi James to find out more about the pair's heart-warming romance, because I don't know about you, but I just can't get enough of them.

The sun was shining, Meghan had pulled off yet another style coup in a denim Carolina Herrera dress, Harry was looking devastatingly dashing in his polo gear, and love was well and truly in the air. So is it any wonder these two couldn't keep their hands off each other? According to James, despite the very public nature of the polo match, Meghan and Harry only had eyes for each other.

"The choreography is perfect as only PDAs between genuinely attracted people can be and its tellingly intimate given the very public occasion," she says. "These two are showing us they still fancy the pants off one another, despite recent royal restrictions that have nudged them into less tactile behaviour on formal visits."

Photographs of the kiss sparked a lot of comparisons with a similar encounter between Prince Charles and Diana at a polo match back in 1986, but James says the bond between Prince Harry and Meghan is much more real and romantic. Phew.

"Royal men have always used polo to parade their sexier, macho side but the kisses from their wives haven't always gone well," James explains. "The infamous miss-kiss between Charles and Diana [in 1992] illustrated the depth of their marital despair as Diana turned her head to avoid Charles's kiss and he was left publicly wincing as his lips landed on the side of her hair. This kiss between Harry and Meghan signals the depth of their love and passion though."

I think Meghan and Harry are singlehandedly restoring my faith in true love after a few too many episodes of Love Island. And it's no wonder, as James says the kiss was like something out of a romantic novel. Honestly, if your heart hasn't melted yet then we can't be mates. James tells me:

"Meghan tilts her head back in a traditional gesture of momentary surrender and bares her neck in a signal of trust. Harry adopts the classic pose from romantic fiction, leaning down and into the kiss with his eyes closed."

She also explains that, unlike their wedding kiss where the couple appeared very aware that they were giving the people what they wanted (and got the giggles as a result), this kiss was a much more natural, unplanned display of affection. James says: "There was some cheek-rounding during their wedding kiss to suggest shared suppressed laughter but this more spontaneous and rather relaxed kiss oozes something more like genuine passion."

So there you have it, Meghan and Harry really are love's young dream. And if you need me, I'll be hanging out at the polo, looking for my Prince.