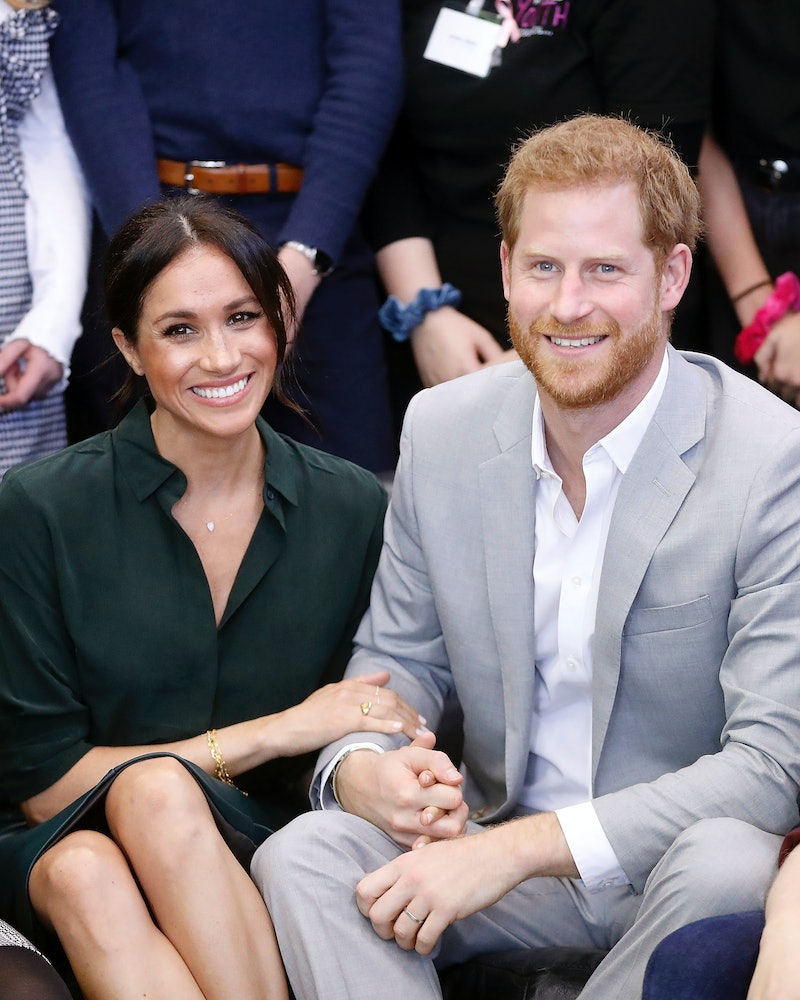 On Wednesday, the Duke and Duchess of Sussex had their first joint visit to Sussex, and it turned out to be a huge success. Of course, Meghan Markle and Prince Harry showcased PDA in Sussex, because that's just who they are as a couple. They care for each other so much they enjoy holding hands or briefly placing their hands on one another's backs. It's how they express love, but their public displays of affection also show how in-sync the royal couple truly is.

Specifically, while visiting Sussex there was a moment where they demonstrated very subtle PDA. As you can see below in a video shared on Twitter on Oct. 3 by the Daily Mail's royal correspondent Rebecca English, Markle's hand is seen on Harry's back, while they adorably chat with school children. Harry continues to move around to make sure he shakes every child's hand, so Markle repeatedly replaces her hand on his back to keep up with his changing position.

Now, it may look a bit awkward at first, but it's actually extremely sweet. By Markle continuously touching Harry's back, it just shows how in-tune they are with each other. They work so well together and make their royal duties look effortless. You can also tell how genuinely happy they are in this moment. They both can't help but smile and laugh with the kids, who are also overjoyed at being in the presence of the Duke and Duchess of Sussex.

This wasn't the only time during their special visit that Markle and Harry showed PDA, either. In another video tweeted by English, they held hands as they made their way to their next stop.

During one portion of their trip, they also sat closely together and held hands. As you can see below, Markle's free hand also affectionately touched the outside of Harry's hand. Let's also take a moment to take in their facial expressions. Those aren't forced smiles, but pure happiness. Harry and Markle clearly love spending time together, even when they're technically working.

Finally, here is another photo from their Sussex outing, in which Harry now has his hand placed gently on Markle's back.

During Markle and Harry's first royal outing as an engaged couple in December 2017, people first started noticing just how affectionate they are in a public setting. Myka Meier, the founder and director of Beaumont Etiquette, told People about their PDA, "While Prince Harry and Meghan holding hands is atypical for royal engagements, it is a seemingly welcomed gesture to show unity and celebration of their engagement period."

She also explained when it comes to PDA, it's up to what each royal couple prefers and depends on the type of event they are attending. In April 2016, Meier once again spoke with People, where she added, "There is no actual etiquette or royal protocol that says the couple must refrain from PDA."

For example, at Harry's July polo match, the two shared a kiss. Obviously, it made headlines, but Markle kissing Harry was simply her way of congratulating him on his win. That's what couples do. Yes, they're British royalty, but they are also two human beings doing what every other couple does when they're in love or proud of their partner.

One might not be a fan of PDA, but when it's as subtle as what Markle and Harry participate in, it's actually very sweet and welcomed.