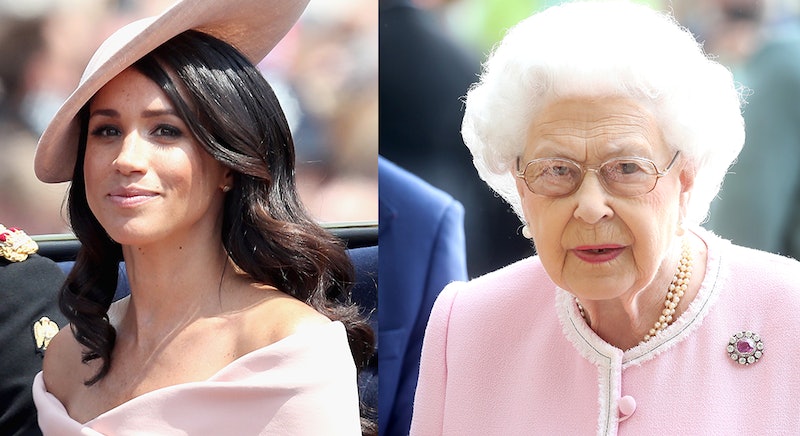 For weeks, the evidence has been abundantly clear that the special relationship between Meghan Markle and the Queen has been moving at full steam ahead. And one look at Markle and the Queen's train for their solo trip is proof that the newly minted Duchess of Sussex is in for a royal treat when the pair embarks for northwest England's Cheshire on the night of Wednesday, June 13, as reported by People.

Of course, they'll be riding in style. Equipped with an office, sleeping quarters and dining areas, the Royal Train, which will transport Markle and her new grandmother-in-law to the English county, which is located 165 miles northwest of London is quite literally fit for a queen — and the perfect mode of transport for the overnight girls' trip.

The "Buckingham Palace on wheels" includes nine burgundy carriages that "provide accommodation for the royal household staff, railway staff and police personal protection officers," according to People. The pièce de résistance: The Queen’s saloon, which the magazine describes as "a 75-ft. long carriage divided into a formal entrance hall, a sitting room, bedroom and bathroom with a full-sized bath. Adjoining her area are bathroom facilities for the Queen’s dresser and a second lobby."

Another hilarious detail: "The conductors make sure that there are no bumps in the ride after 7:30 A.M. which could result in spillages while the Queen is taking her bath," according to Vanity Fair.

While the Royal Train is not used often, "the Queen uses it when possible for longer journeys and will invite other members of the family to travel with her if they are carrying out Royal duties together, therefore it is only sensible that The Duchess of Sussex is traveling with the Queen on this occasion," former royal butler Grant Harrold recently explained to CNBC Make It.

Despite the formal decor, Markle — who will be traveling sans new husband Prince Harry for the first time — can expect a more informal bonding experience with her new in-law. “The train seems to be the one place where, when away from home, the Queen and her family can truly relax out of the public gaze,” author Brian Hoey wrote in his tome, At Home With the Queen: Life Through the Keyhole of the Royal Household, per People.

The trip “is a really positive sign of favor, encouragement and endorsement by the Queen,” Robert Lacey, a historical consultant for Netflix's The Crown, also recently explained to People. “I can’t think of a more striking signal and expression of welcome into the royal family for a new recruit. It shows the Queen’s excited by it.”

Indeed, the pair has formed a special bond, with Her Majesty taking her newest family member under her wing. "The Queen knows the potential pitfalls of not giving [rookie Royals] a guiding hand," royals expert Ingrid Seward told People. "It’s all about the monarchy. She can’t expect Meghan to know everything without being shown."

In fact, Vanity Fair reported that the Queen is giving Markle the opportunity to ride the train (which is only available to the Queen, Prince Philip, Prince Charles, and his wife, Camilla, Duchess of Cornwall) before her new husband and her brother and sister-in law Prince William, Duke of Cambridge and Catherine, Duchess of Cambridge. That is, at least, "as best as anyone knows."

At the very least they should be well-rested for their full day of events when they arrive in Cheshire on June 14. On the Queen and Duchess' packed itinerary: touring and opening Storyhouse, a newly renovated cultural center which boasts a theater, library, restaurant and cinema, opening the Mersey Gateway Bridge, and a lunch at Chester Town Hall.

The Queen and her new granddaughter-in-law's luxe accommodations for their first solo trip are not only making us jealous, they also provide clear evidence that Markle is on the right track with her new royal duties.