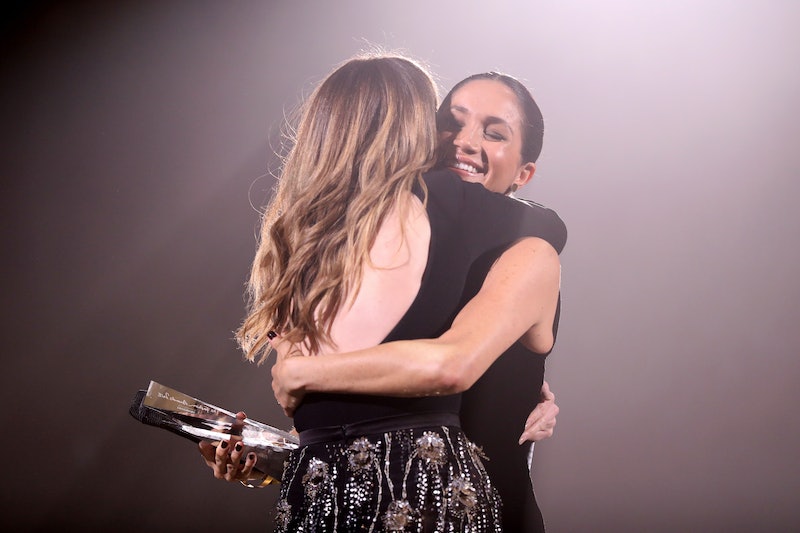 For some women, there’s no dress more important than their wedding dress - or in Meghan Markle’s case, no designer more beloved than the woman behind hers. If you can cast your mind back to that magical day (I do all the time), you might remember that the Duchess of Sussex floated down the aisle in a bateau neckline dress by Givenchy’s British creative director Clare Waight Keller. Well, since then the pair have become fast friends with Givenchy becoming one of Markle’s go-to brands and that friendship was put on display last night at the Fashion Awards in a moment that had me wanting to call my best pal. Meghan Markle presented Clare Waight Keller with a super prestigious prize and their sweet interaction was just the cherry on top.

Monday night was akin to the fashion world’s Oscars, with categories for everything from Urban Luxe (which unsurprisingly went to Off-White) to Brand of the Year (which unsurprisingly went to Gucci). Givenchy and Clare Waight Keller were up for a couple of awards and she managed to snag this year’s coveted Swarovski crystal trophy for British Designer of the Year Womenswear, beating the likes of Simone Rocha and Victoria Beckham.

The Duchess of Sussex's surprise appearance onstage to present the award kind of gave the game away — especially as she was wearing a breathtaking custom-made Givenchy dress.

The moment Rosamund Pike introduced Her Royal Highness, the Duchess of Sussex, as “a very special guest to present the award”; the crowd instantly burst into delighted screams and gasps. (Appropriate TBH, for when Markle walks into a room.)

Wearing a one shouldered gown which showcased her growing bump, she said, “I feel especially proud to announce tonight’s winner who is yes, a British designer leading on the global stage with vision and creativity, but also with incredible kindness. Which is why when I met her for the first time eleven months ago, I knew we would be working very closely together.”

There was no doubt in the Royal Albert Hall at that point that Meghan was talking about Clare Waight Keller, who was completely surprised at the sight of her pal. It was super heartwarming because the first thing Keller did was cross the stage to give Meghan the longest and loveliest hug, which the royal returned with a massive smile on her face.

It took a moment for Keller to catch her breath, as understandably she was overwhelmed with the accolade — partly because “she was really shocked” that Meghan was there at all. She turned to Meghan, then to the audience and said, “I just saw her last week and I had no idea!”

Meghan looked every inch the proud friend as she watched Clare Waight Keller give her speech, honouring her colleagues at Givenchy and her family before Keller eventually drew the focus back to her royal friend.

“Actually,” Keller said, turning to Markle, “as part of my speech, you were in it because I didn’t think you were going to be here tonight.”

After the pair got over their giggles (fellow presenter Rosamund Pike was third wheeling hard by that stage), Keller eventually managed, “I was going to thank you because this woman is so amazing and I got to know Meghan on such a personal level, and to have someone like that trust you in an incredible moment in their life is something that is just the most unbelievable honour. And I can’t thank you enough.”

I’ll be back in a sec, I just need to call all my BFFs and tell them how much I love them.