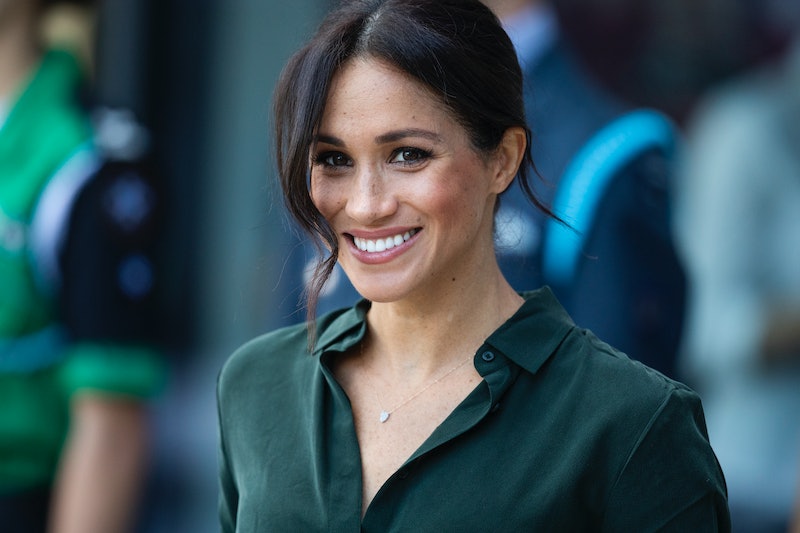 Meghan Markle was a champion for women's rights long before she became the Duchess of Sussex, and she's repeatedly demonstrated her commitment to feminism as a member of the Royal Family. The latest example? Her schedule for her upcoming royal tour with husband Prince Harry, during which the couple will visit Australia, Fiji, Tonga, and New Zealand. Meghan Markle will champion women's rights on the tour, the Times reports; she'll learn about a UN Women's project in Fiji, for instance, and celebrate the 125th anniversary of women receiving the right to vote in New Zealand.

The Duke and Duchess of Sussex will arrive in Sydney on October 16, and depart from Auckland on October 31. Their tour, according to the Palace, "will focus on youth leadership, and projects being undertaken by young people to address the social, economic, and environmental challenges of the region." They'll also focus on "environmental and conservation efforts," the Palace says, and will celebrate the 2018 Invictus Games.

It's Meghan’s schedule, however, that's attracted particular interest, thanks to its strong focus on women's rights. The Duke and Duchess will attend a reception held by New Zealand's Governor-General, Patsy Reddy, to mark 125 years of women's suffrage in the country, while the Times reports that Meghan "will undertake engagements without her husband and make several speeches." She'll speak at the commemorative suffrage event, the newspaper says, and at the University of the South Pacific in Suva, Fiji.

One of Meghan’s solo engagements? A "morning" tea in Fiji, hosted by the British High Commissioner, where the Duchess will learn about women's organisations across the country. In particular, she'll focus on UN Women's project "Markets for Change," which supports female marketplace vendors; she'll see the project in action at Suva Market. The visit's particularly fitting given Meghan’s former role as UN Women's Advocate for Women’s Political Participation and Leadership — back in 2015, the Palace says, she spoke on behalf of UN Women on International Women's Day, telling a New York City audience, "I am proud to be a woman and a feminist."

The royal couple will keep to a pretty packed schedule on their tour. Example items on their itinerary? In Australia, they'll open a new institute at Taronga Zoo, Sydney, and watch a rehearsal by the Aboriginal and Torres Strait Islander dance company Bangarra Dance Theatre. In Fiji, they'll attend the Veirqaraqaravi Vakavanua welcome ceremony, held in Suva, while Prince Harry will visit Colo-i-Suva Forest Park.

The Duke and Duchess' schedule in Tonga features a dinner with King Tupou VI and Queen Nanasipauʻu, a celebration of Tongan products and handicrafts, and a visit to the oldest secondary school in the Pacific, Tupou College. In New Zealand, meanwhile, they'll attend a pōwhiri (a Māori welcome ceremony) in both Wellington and Rotorua, meet young people supported by mental health projects across New Zealand, and visit a kiwi breeding project in Rainbow Springs. Oh, and they'll also participate in a welly-wanging competition.

A rather staggering itinerary for the royal couple to look forward to, then. And one thing their tour schedule makes clear? Meghan Markle is royally committed to her feminist values.

More like this
Will Archie & Lilibet Attend The Queen's Funeral?
By Sam Ramsden
Twitter Is Saying The Same Thing About Roger Federer’s Retirement From Tennis
By El Hunt
The Queen’s Cause Of Death May Not Be Formally Announced
By Shahed Ezaydi and Catharina Cheung
Princess Charlotte Proved She's Wise Beyond Her Years At The Queen's Funeral
By El Hunt
Get The Very Best Of Bustle/UK