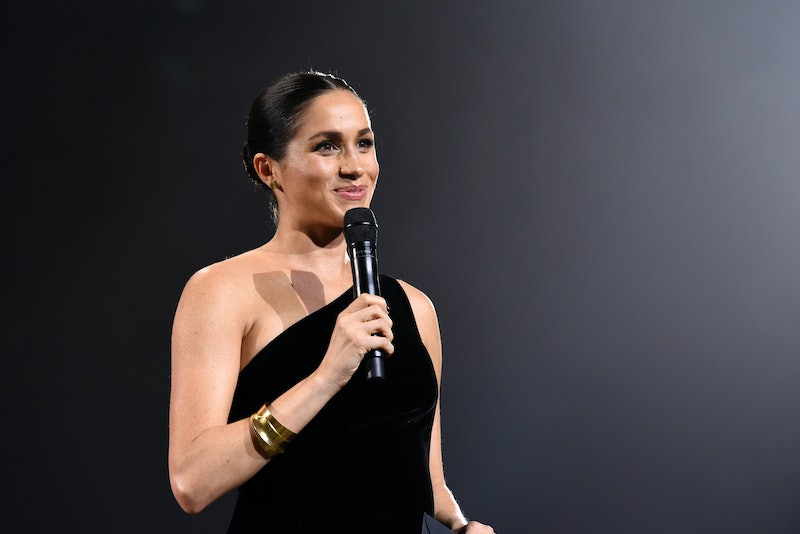 Last night’s Fashion Awards was an absolute delight, filled with sartorialists at the top of their game and a surprise appearance by one of the stylish women around: Meghan Markle. The Duchess of Sussex dropped by to not only support British designers, but also to present her friend and wedding dress designer Givenchy’s Clare Waight Keller with an esteemed award for Best British Designer in the womenswear category. A few diehard royalists noticed one small thing about her look that was slightly unusual, as Meghan Markle was wearing dark nail polish.

Markle stepped out in a custom-made dress designed by Keller, looking modern, sleek, and confident as she strode across the stage to give Keller a massive hug. In the past, it has been reported by OK! Magazine that it was “simply royal etiquette” not to wear coloured nail polish as “fake nails or coloured nail polish is deemed vulgar by the royal family”. (I for one am proud to be "vulgar," with my current set of chipped glittery Christmas nails.) While to my knowledge none of this has ever been confirmed by the Palace of course, it’s become this kind of royal family urban legend that they’re expected to shy away from bold colours — even though Meghan Markle, Kate Middleton, and even Princess Diana have kicked that to the curb.

Meghan stepped out last night wearing what appeared to be burgundy-black nail polish, matched to the hue of her one-shoulder gown. It goes without saying that it was a major fashion statement and looked utterly sophisticated, with just the right amount of badass rock chic. As she cradled her baby bump and grinned over her friend Clare Waight Keller as she gave her winner’s speech, her digits stood out in all the right ways.

According to Harper’s Bazaar, the Queen holds a “dislike of bold colours” when it comes to a manicure. However if that’s the case, then it seems to be more of a personal preference rather than a hard and fast rule. In fact, she seems to go au naturale for many of her engagements though way back in 1989, nail polish brand Essie claimed that “the Queen of England’s hairdresser [sent] Essie a letter requesting "ballet slippers" — the only colour Her Majesty would wear.” As a shade, Ballet Slippers is as tame as it gets: it’s a pinky white hue that certainly doesn’t rock the boat.

If you look back through the royal family’s nail polish choices however, Princess Diana certainly couldn’t have cared less for the "rule." In fact, she was renowned for her striking scarlet nails and according to Heart she apparently began to wear them out more “after her marriage [to Prince Charles] turned sour”. (I personally love to imagine it was her little “screw you” to royal tradition.)

And it could be that Princess Diana’s decision to flout the Ballet Slippers of the world actually helped open the door for her future daughter-in-law, Kate Middleton, to do the same. Although I’ve never spotted Kate wearing a bright shade on her fingertips and she was actually rumoured to have worn the Queen’s favourite Essie nail polish on her wedding day, her toes are a different story. Every now and again, you’ll see a little sneak peek of a burgundy polish from beneath a pair of peep toe heels.

At the end of the day, nail polish is such a personal choice and TBH a good mani — whatever the shade — always looks sleek and sophisticated. Fingers crossed somebody ventures into crazy nail art territory: I can’t wait for Camilla Parker-Bowles to step out with reindeer themed digits.