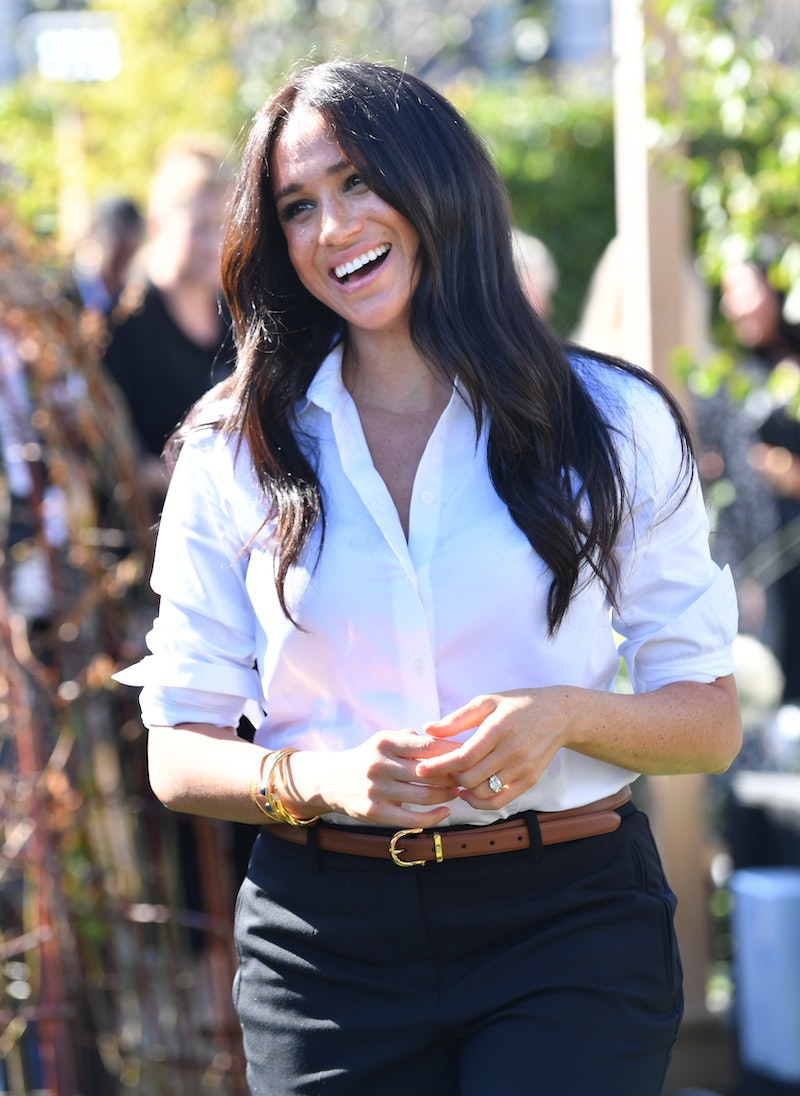 After much buzz and anticipation, Meghan Markle just launched her Smart Works collection on Sept. 5. The drop marked the end of Markle's maternity leave, and she arrived to the event for the collection's release wearing something sentimental. Meghan Markle wore Princess Diana's bracelet to the Smart Works clothing launch, embodying her late mother-in-law's charitable spirit.

Markle dropped the Smart Works capsule collection at John Lewis's flagship department store in London. The line will benefit her charity work with Smart Works, which is a charity that helps women find jobs by offering interview coaching and professional wardrobes they could wear to the interview and office. Markle arrived at the event wearing two pieces from the Smart Works capsule collection: a crisp white button-down shirt from Misha Nonoo tucked into black trousers from Jigsaw.

Markle accented the look with jewelry from Princess Diana's own collection, wearing both an open cuff bangle and a set of gold butterfly earrings. The open cuff is made from gold, and it has blue stones and diamonds on either side.

Markle wore the cuff and earrings a number of times, proving that they are quickly becoming staples in her wardrobe.

Markle first wore the open cuff bracelet and butterfly earrings during her first royal tour with Prince Harry. The Duchess stepped out in them during her first official engagement in Sydney last Oct., which followed the news announcement that the Duke and Duchess were expecting their first baby. Not only was it sentimental to wear Princess Diana's jewelry right after her birth announcement, but the two pieces offered another link to Princess Diana's past. Princess Diana and Prince Charles also took their first royal tour to Australia and New Zealand.

During that same tour, Markle also wore the gold cuff bracelet and butterfly earrings while at a reception held by the Governor-General at Admiralty House in Sydney.

Fast-forward to Jan. 2019, and Markle once again wore the gold cuff to a charity gala performance of Cirque du Soleil's Totem, in support of Sentebale, which is Prince Harry's charity work that supports children in Africa who are affected by HIV.

Princess Diana was also photographed a number of times wearing the bracelet and butterfly earrings.

The first time that Princess Diana was spotted with the bracelet was in 1990, when she visited the Lord Gage Centre for Old People in East London.

She was also snapped wearing the bracelet in 1994, when she attended an event in Mayfair.

As for the gold butterfly earrings, Princess Diana was first seen wearing them during a 1986 visit to Canada in honor of the country's 150 Anniversary of Confederation.

By wearing Princess Diana's jewelry, Markle honors her late mother-in-law and channels her through these charitable events and important life moments. Now we have to wait and see where Markle wears them next.