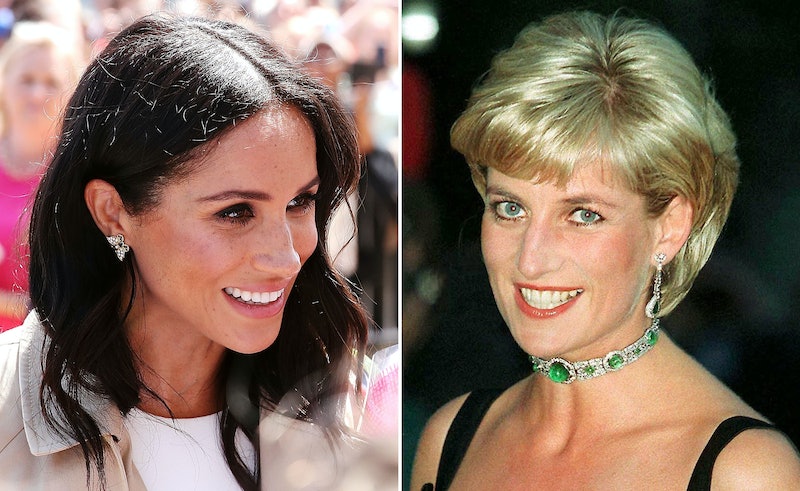 Meghan Markle and Prince Harry’s royal tour has officially started — and so has the duchess’ whirlwind of stylish fashion choices, which has me particularly jazzed. However, her styling is far more complex than it probably seems on the surface. You see, so much planning goes into every single outfit and accessory, and there’s a reason why Meghan Markle wore Princess Diana's jewellery on her tour of Australia. Many eagle-eyed royalists that spotted her accessories are convinced that this was the duchess' way of paying tribute to her mother-in-law in the light of the news that she is expecting her first child with Harry.

Diana famously wore the earrings back in May 1986 while in Vancouver during a Canadian royal tour, accompanied by her then-husband Prince Charles. Back then, the enduring style icon chose to pair the low-key studs with a matching golden necklace. However, Markle chose not to wear the full set.

The newly pregnant Duchess of Sussex also dipped back into Diana’s jewellery box for her golden bracelet, which was set with two gigantic blue gems. Diana was pictured wearing this in the same year as the butterfly earrings, most memorably in a sweet photograph where she interacted with the public on tour.

Of course, this isn’t the first time that Markle has honoured Harry’s late mother through her fashion choices, as she chose to wear one of Princess Diana’s aquamarine rings on one of the most important days of her life; her wedding to Prince Harry.

Even if the late Princess of Wales couldn’t be with them in person to celebrate, her ring sparkled on Markle’s finger all through the marriage reception.

According to Marie Claire UK, Diana stipulated in a letter that her impressive jewellery collection be left to her sons in the event he passed away. She wrote: "I would like you to allocate all my jewellery to the share to be held by my sons, so that their wives may, in due course, have it or use it." And both Prince William and Prince Harry have made sure that Di’s diamonds really are forever, as both Kate Middleton and Markle’s engagement rings are gorgeous nods to their late mother.

It’s been claimed that Diana’s butterfly earrings are a new addition to Markle’s wardrobe, as they were "a gift from her husband Prince Harry on the happy news that he would soon become a father." In case you’ve been sleeping under a rock for the past 24 hours, it was announced on Monday morning through official Kensington Palace channels that Markle is pregnant. The announcement read: "Their Royal Highnesses The Duke and Duchess of Sussex are very pleased to announce that The Duchess of Sussex is expecting a baby in the Spring of 2019."

I’m 150 percent sure that if Diana were still here, she’d be over the moon for Markle, Harry, and the news of their future child. I think she would have been an amazing grandmother. While it's sad that she won't be there with her son when he becomes a father for the first time, I have no doubt that he will be an incredible parent, as will Markle.