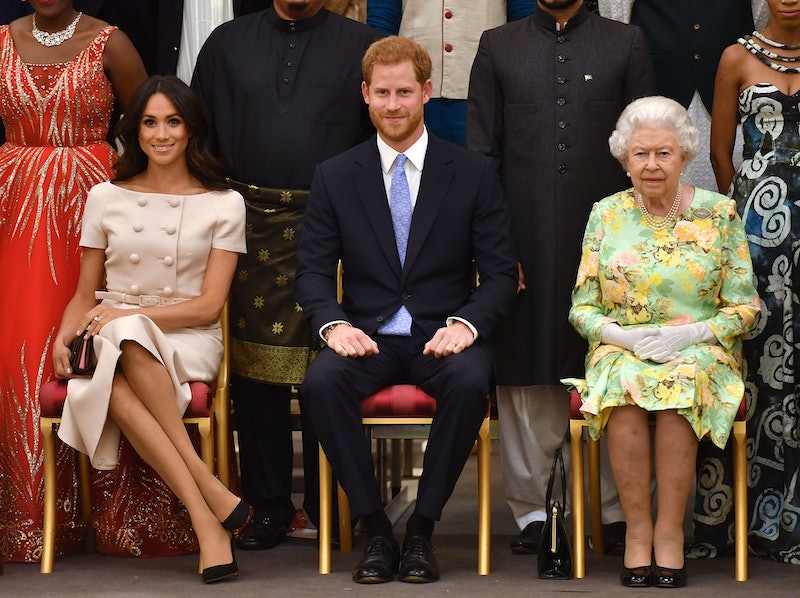 Meghan Markle joined her husband Prince Harry and the Queen for yet another royal event on Tuesday, and — unsurprisingly — did it in style. The recently appointed Duchess of Sussex was one of the royals and many celebrity guests in attendance at the Queen's Young Leaders for 2018 awards ceremony, which was held at Buckingham Palace. At the event, eagle eyed observers noted that Meghan Markle's dress had a Princess Diana feel to it. So who is responsible for the blush creation?

According to reports, the dress was a Prada design. Hello! royal correspondent Emily Nash tweeted that the Duchess was wearing a powder pink double-breasted number with oversized buttons, courtesy of the renowned Italian fashion house. Markle was also wearing a pair of black court heels, sporting a bracelet adorned with a cross on her wrist, and carrying a small, black clutch in her hand. She completed the look with some delicately-winged eyeliner and a cheek blush perfectly complimentary to her Prada ensemble.

And, yes, it was pretty reminiscent of the ensembles worn by the late and great Princess Diana. Not only did the Princess of Wales love a double breasted look — especially a blazer — and she even wore a very similar design in a light pink hue to inspect the 2nd Battalion Of The Princess Of Wales Royal Regiment in May 1995.

Markle's attendance at the ceremony is certainly no surprise, given that the Palace confirmed last week both she and Prince Harry would be attending the event. Other attendees at the party included David Beckham, comedian Lenny Henry, and boxer Nicola Adams. However, what you may find surprising is just how rapidly Markle is adjusting to married life within the British Monarchy.

Her appearance at the Queen's Young Leaders for 2018 awards ceremony on Tuesday marks yet another occasion in which Markle has accompanied Queen Elizabeth to an event since marrying her grandson. Over recent weeks, Markle has attended both her first ever Royal Ascot — where she joined HRH in the royal box to watch the races — and her first ever solo outing with the Queen at the opening of the Mersey Gateway Bridge. Thus, it's probably fair to assume Markle has settled quite well into Royal life.

But, what is the Queen's Young Leaders programme exactly? And, what prompted Markle to make an appearance at the event?

The Queen's Young Leaders programme honours the work of 18-29 year olds from across the 53 Commonwealth nations who have contributed to their own communities in a valued and significant way. The programme was founded in 2014 and the awards themselves take place during a week in which all recipients are flown to the UK for "training, mentoring, and networking." So far, it's been a pretty exciting week for this year's recipients, who, on Monday, attended an event held by Theresa May at 10 Downing Street.

Being invited to both Downing Street and Buckingham Palace within the same week is a pretty big deal by anyone's standards Thus, it's rather obvious that the Queen's Young Leaders Programme is a seriously honourable cause, which would explain Markle's attendance at the awards ceremony. Nonetheless, what may also explain Markle's appearance is her previously displayed interest in all things Commonwealth.

Prior to attending the awards, Markle has previously expressed and demonstrated her support for the Commonwealth in a variety of ways. In April, she attended the Commonwealth Youth Forum, which the Evening Standard reports was a change to tradition for royal brides to be, as Markle was yet to be a fully fledged member of the royal family at that point. And, then when she did marry Prince Harry, Markle further showed her Commonwealth support by wearing a 16-foot veil hand-embroidered with a flower from each Commonwealth nation.

I can't wait to see what she goes on to do within the Commonwealth as her role within the royal family grows.