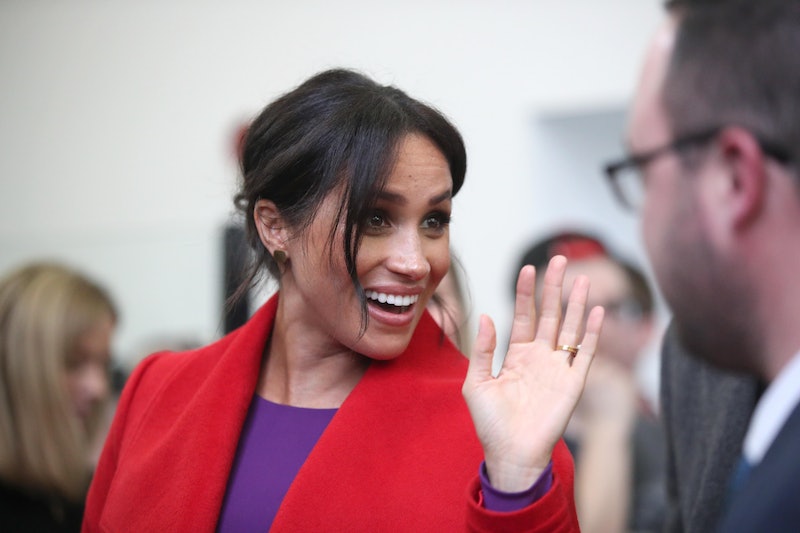 It truly doesn't feel like three months have passed since Meghan Markle and Prince Harry announced they were expecting their first child. At the time it was rumoured that the Duchess was around twelve weeks pregnant, according to the BBC. And on Monday, during a visit to Birkenhead, Meghan Markle revealed that she is six months pregnant, and her baby is due in late April.

When Kensington Palace first announced the exciting news, they were pretty vague on the deets — revealing that their baby would be due in Spring 2019. At the time, it was rumoured that the Duchess was three months pregnant and the due date would fall around early April.

According to People, Markle let it slip while chatting with the public during her and Harry's first joint engagement of this year. "We asked her how her pregnancy was going and she said she was six months and tapped her tummy," a local told the magazine. Hello! magazine's Royal reporter Emily Nash also wrote on Twitter, "Meghan has told wellwishers in Birkenhead that she is six months pregnant - due end of April/beginning of May! Lots of baby chat today!" So the estimated arrival of the Duke and Duchesses's baby hasn't changed too much, but it's nice to hear it from Markle herself. The Duchess also took a shine to the name Amy for the baby if it is a girl, after it was suggested by a child in the crowd.

Wearing a purple midi dress from Artizia's Babaton collection and a red Sentaler coat, Markle charmed crowds along with Harry before they unveiled a plaque for a statue erected in November commemorate war poet Wilfred Owen, who died 100 years ago. The Duke and Duchess of Sussex also met with veterans of and members of the Birkenhead Institute Old Boys, which Owen was a member of, the Daily Mail reports.

Markle and Harry continued their Merseyside trip by visiting local community organisations, such as Tomorrow's Women Wirral, Feeding Birkenhead and Hive Wirral Youth Zone, according to Hello magazine. Their visit to Feeding Birkenhead's supermarket named Number 7 was especially adorable, as Markle presented a Moses basket full of baby products to local Angel Midgley. "I would say that I should lift if for you, but neither of us should be holding it!" Markle said in jest. Harry also jokingly asked whether or not there was actually a baby in there. Gosh, I love these two so damn much.

This wasn't the only thing they did during their visit to the supermarket, as the Duke and Duchess "officially opened the site which is made up of churches, food banks, community groups, and other organisations working together to eliminate hunger" in the area. The couple also spent time speaking with members and staff to understand the importance that the organisation has on the community.

Even though I'm so ready to see that adorable first picture of the royal couple holding their first child outside the hospital (roll on April), I'm totally basking in the pregnant glow and beaming smile of the Duchess on these royal visits. Especially when they involve so many important causes like the ones the couple highlighted today.

More like this
Holly Willoughby & Phillip Schofield #Queuegate Drama, Explained
By Sophie McEvoy
Buckingham Palace Shuts Down Rumour About King Charles III's Coronation
By Sophie McEvoy and Sam Ramsden
The Queen’s Cause Of Death May Not Be Formally Announced
By Shahed Ezaydi and Catharina Cheung
Two UK Cities Are Now In The Running To Host Eurovision 2023
By Sam Ramsden and Rachel Mantock
Get The Very Best Of Bustle/UK