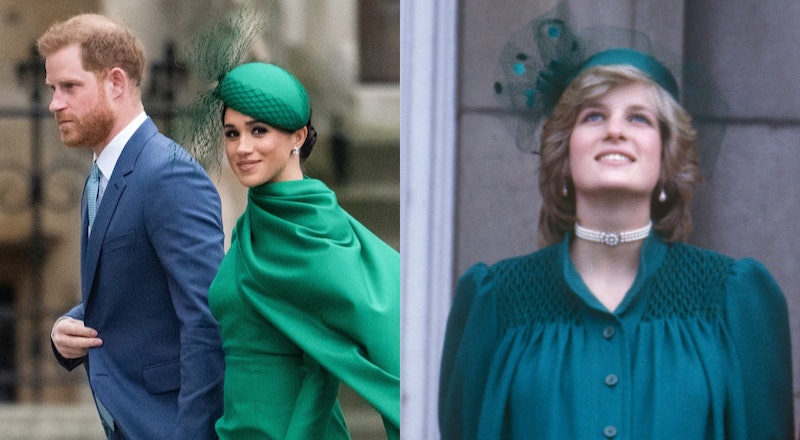 Meghan Markle's royal duties are coming to an end, as she's preparing to officially relocate to Canada with Prince Harry and baby Archie and drop her title. On April 1, the couple's time as working royals is officially over. Last week, Prince Harry and Meghan Markle made their last public appearances as Royals, attending several formal events including the Endeavour Fund Awards and the Mountbatten Music Festival. In the whirlwind few days, filled with outfits galore, Markle made quite the sartorial tribute to Prince Harry’s late mother, Princess Diana.

One of the world’s great style icons, Princess Diana's fashion legacy extends far beyond her untimely death in 1996. She remains a muse for designers, celebrities, and fashion obsessives the world over, but her influence on Markle is especially significant. Princess Diana was considered a royal rebel, particularly when it comes to breaking fashion protocol, and Markle seems to be following in her footsteps on that front.

Below, find Markle’s final looks as a royal along with the similar Princess Diana fashion moments she was inspired by. From emerald green cape dresses to bright red gowns to turquoise pencil dresses, it’s clear that Diana’s style has made a mark on Markle.

More like this
Hailey Bieber Looks Just Like Princess Diana & I Need To Copy Her ASAP
By Sophie McEvoy
This 'One Tree Hill' Wardrobe Error Is Going Viral On TikTok
By Brad Witter
30 Of Kendall Jenner’s Best Runway Looks To Date
By Dominique Norman
Rita Ora Joined The Cut-Out Trend With These Bejewelled Butterfly Trousers
By El Hunt
Get Even More From Bustle — Sign Up For The Newsletter
From hair trends to relationship advice, our daily newsletter has everything you need to sound like a person who’s on TikTok, even if you aren’t.