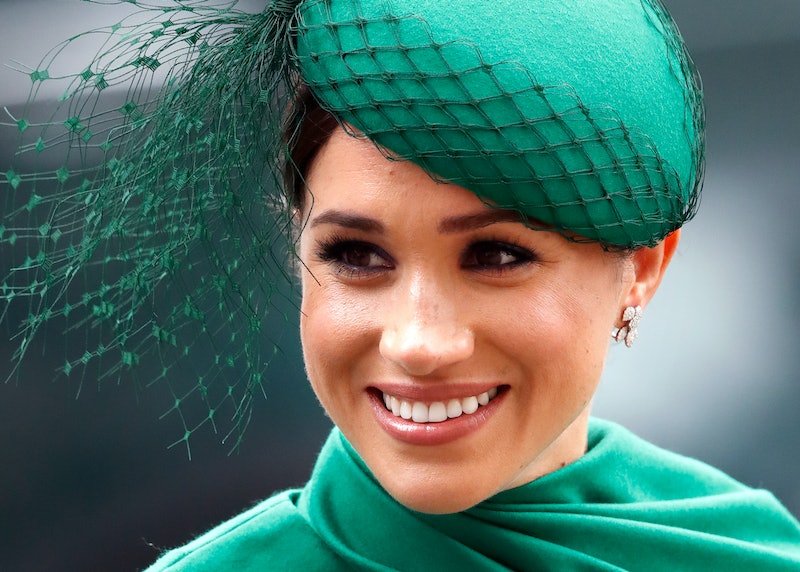 Meghan Markle and Prince Harry have made their last official royal appearance at the Commonwealth Day services in London with the Queen as well as Kate Middleton and Prince William. While her vibrant Emilia Wickstead dress and cape were stunning, Meghan Markle's blue eyeshadow was the perfect way to break a final royal rule.

Those who weren't paying close attention to Markle's makeup likely only noticed that her signature smoky eye was back for the church service. However, upon a closer look, fans can see the eye look was created using a bold, navy blue swept across her lid and blended into her crease. The hue was then repeated along her bottom lash line to give the eye its smoky and smudged out look.

Not only does the blue smoky eye mark a major beauty shift for Markle, who has worn more neutral tones while serving as a working member of the royal family, but it's also a royal no-no. According to Cosmopolitan, royal woman are not allowed to wear bold eyeshadows like the blue Markle chose for Commonwealth Day.

However, the event marks her last as an active royal, and the shadow could just be a final farewell to those pesky style rules she has had to abide by for the past few years.

But Markle's blue eyeshadow isn't her first time breaking royal beauty protocol during her final events. She began her last moments as a royal with a major makeup splash wearing a deep, chocolate brown smoky eye and berry lip to the Endeavor Awards.

The look, done by her longtime makeup artist and friend Daniel Martin, was the most makeup the Duchess has ever worn, and like her blue eyeshadow, certainly seemed like a way to express herself in a more authentic way than what's been previously allowed.

Now, with Markle officially free of more royal events and duties, fans of the Duchess of Sussex could see the philanthropist donning even more daring beauty looks. One can only hope.