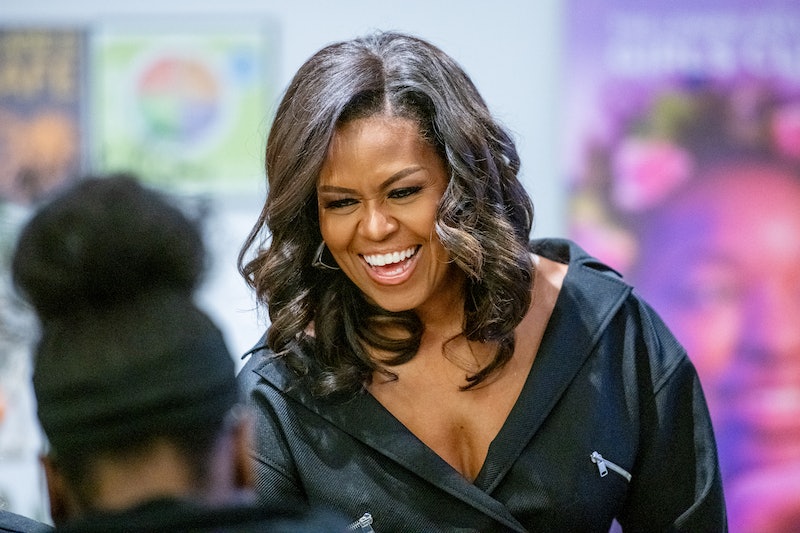 The September issue of British Vogue is an incredibly special one for a number of reasons. In addition to being guest-edited by Meghan Markle, the issue also features an interview between the duchess and Michelle Obama. And during Meghan Markle's interview with Michelle Obama, the former first lady shared the advice that she would give to her daughters and, of course, it's a spot-on message that everyone should take note of.

Yes, you read that right, two of the most iconic women in the world, Markle and Obama, engaged in a Q&A session for the latest issue of British Vogue. The Duchess of Sussex, stepping into her guest editor role, asked the Becoming author some questions about her life, and, particularly, her family. Just like Markle wrote, Obama's answers were so very thoughtful and authentic.

"Don’t just check the boxes you think you’re supposed to check, like I did when I was their age. I tell them that I hope they’ll keep trying on new experiences until they find what feels right. And what felt right yesterday might not necessarily feel right today. That’s OK – it’s good, even."

Obama comes from a place of experience, as she went on to share that she changed her own career path while in college. "When I was in college, I thought I wanted to be a lawyer because it sounded like a job for good, respectable people," she said, "It took me a few years to listen to my intuition and find a path that fit better for who I was, inside and out." (After studying law, she would later go on to work in the public service sector.)

Obama's conversation with Markle comes as a part of a larger collective of dynamic stories that the duchess chose to highlight in the magazine. The former actor wanted the September issue, named "Forces for Change," to "speak not just to where we are, but to where we hope to be." To do so, she not only highlighted Obama's always-thoughtful perspective, but she put the focus on other change-makers, as well, including actor Laverne Cox, writer Chimamanda Ngozi Adichie, and New Zealand Prime Minister Jacinda Ardern.

"For the cover, The Duchess chose a diverse selection of women from all walks of life, each driving impact and raising the bar for equality, kindness, justice and open mindedness," the official Sussex Royal account detailed on July 29, and continued to express a note of positivity by writing, "The sixteenth space on the cover, a mirror, was included so that when you hold the issue in your hands, you see yourself as part of this collective."

Between the amazing Q&A with Obama to the forward thinking message behind "Forces of Change," it's safe to say that Markle's turn as a guest editor for British Vogue wasn't just successful, it was all sorts of inspiring, as well.