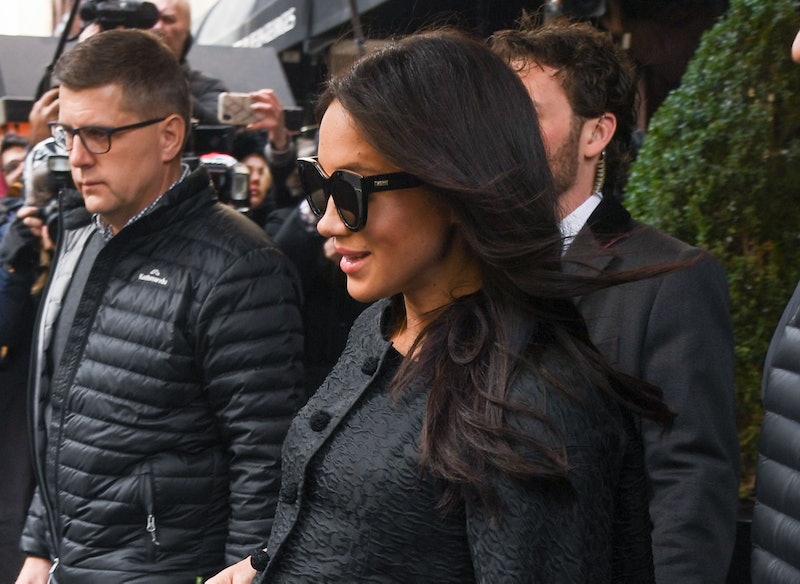 Meghan Markle left London this week to come Stateside for her baby shower, and Markle's NYC baby shower outfit was what you would expect it to be: minimalist, black, and timeless, just like the rest of the Duchess's wardrobe. The expecting royal is due this spring, and she took a secret flight from London to New York on Friday, Feb. 15, until cameras caught her enjoying her time back in the Big Apple with her closest friends.

On Tuesday, Feb. 19, she left the hotel en route to her celebration wearing an outfit that was trademark Markle, where she donned an A-line black peacoat with a flouncy skirt to accommodate her growing baby bump, black skinny jeans, nude stiletto pumps, a matching nude bag, and large frame sunglasses.

The Duchess was traveling to the Upper East Side, where her baby shower is being held, and where a star-studded group of friends will be waiting for her. The guest list is 15 people deep, and close pals like Priyanka Chopra, Suits costar Abigail Spencer, and best friend Jessica Mulroney will be waiting at a hotel where the festivities will take place.

This trip marks a five-day girl getaway that the Duchess of Sussex carved out for herself before the arrival of the baby, filling it with shopping, lunch dates, and rest. This trip makes it the first time Markle has been to the Big Apple since getting married, and she packed it with plenty of down time.

A source told Harper's Bazaar, "The trip is a lovely chance to catch up with friends and spend time in a city she loves. This will be the last time a lot of them will see Meg until after the baby is born so it's nice to share precious moments."

It is said that Mulroney is the one who organized the whole baby shower, and the two were spotted hanging out over the weekend. Mulroney is not only the Duchess's good friend but also a stylist, where the two originally met while the former actress was filming Suits. According to Harper's Bazaar, their dates this week included treating themselves to macarons and tea at the French bakery Ladurée in SoHo.

As for the baby shower itself, details are scarce but E! News got a few leads on the decor from an inside source, where the party appears to be dressed up in the traditional pastel and flower-oriented motif. "The flowers were spring colors in pretty pastel shades," the source told E! News. "There were pink roses and cherry blossom vines. There were tons of flowers delivered before the shower started in an unmarked van. There was also a large flat cardboard box that appeared to be a convertible crib."

But this won't be the only baby shower that Markle will be having, which means we will be treated to a second baby shower outfit worthy of a Duchess sometime soon. According to ABC News royal contributor Omid Scobie, there will be another one scheduled in London. Scobie tweeted, "Today’s baby shower is the first of two, sources tell me," he wrote. "A smaller gathering [is] scheduled for pals on this side of the pond [England] after Morocco."

Time will only tell if Markle will chose another black ensemble that is pure NYC, or if she will go for something a little more London-skewed. Either way, she will look fabulous.