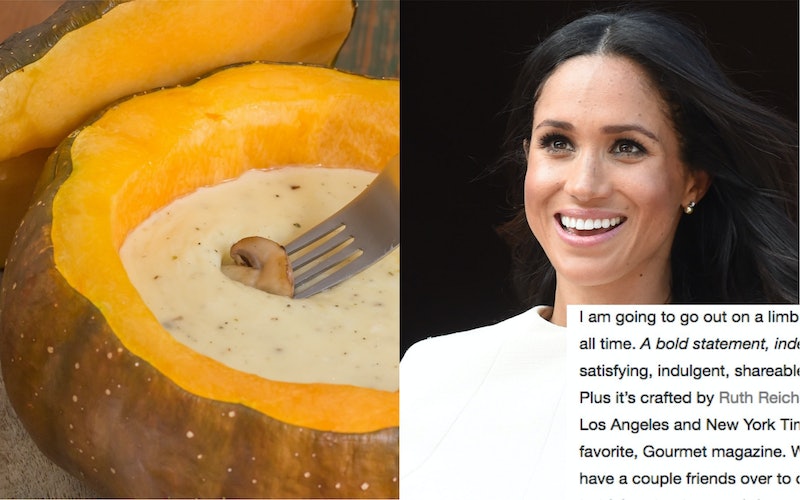 Before the Duchess of Sussex was even officially set to become a member of the royal family, she stopped writing her lifestyle blog, The Tig, and deleted all the contents, leaving only a goodbye message for her readers. But, that didn't mean her posts were actually gone forever, because this is the internet, baby. That's how we know that Meghan Markle loved a certain pumpkin recipe, and we also still know exactly what it is.

As noted by Pure Wow in a post titled "20 Recipes Meghan Markle Swears By," Duchess Meghan wrote about Ruth Reichl's "pumpkin fondue" recipe on The Tig in October 2015 and even said that it was possibly her favorite recipe ever. A copy of the blog post is still available via Bloglovin' (convenient), and it shows that Markle started the post by writing,

I am going to go out on a limb here and say that this may be my favorite recipe of all time. A bold statement, indeed. Why, you ask? Because it’s equal parts satisfying, indulgent, shareable, and perhaps the easiest thing you’ve ever made.

And the recipe does look pretty easy, if you are interested in cutting open and hollowing out a small pumpkin. Basically, you hollow out the pumpkin, and stuff it with layers of toasted baguette and gruyere cheese, drench it in a cream and egg mixture, and bake it until it's all melty. The pumpkin doesn't just serve as a vessel, because once it's cooked, you also eat the pumpkin flesh along with the cheese and bread. (Markle's full version of the recipe is available here.)

It's really more of a gratin than fondue, which Reichl notes in the recipe on her own site. "I originally called this pumpkin soup, but it’s really a gratin baked right inside the pumpkin." She continues, "I was 21 when I developed the recipe, and oblivious to richness so I used nothing but cream. Today I mix the cream with chicken broth (about a cup of cream and a cup of broth). You could also use milk. It’s STILL pretty much of a heart-stopper but it’s irresistible."

The recipe on Markle's site calls for half-and-half and eggs, neither of which are in the recipe Reichl posted, but that's probably because Reichl reworked it some over the years; her post was published a year after Markle's.

The former actor's love of food and drink has been long documented, from posts on her blog to quotes she's given in interviews. Actually, her blog was named after her favorite wine, Tignanello. She also famously talked about roast chicken in her post-engagement interview with Prince Harry. When asked how the proposal went down, Markle said they were in the middle of roasting a chicken at home when Harry got down on one knee. Sounds totally normal. (And also, for those wondering, it was probably Ina Garten's chicken recipe.)

Who knows if Markle and Harry have made the pumpkin recipe together yet, but seeing as it's one of her favorites ever, there's a good chance it'll happen at some point. Maybe around Halloween. As Markle wrote on her blog, "When thinking of Halloween this year, my plan is to have a couple friends over to cozy up to a beautiful bottle of wine, hand out candy to trick or treaters, and devour forkfuls of this gooey, gratifying fondue that is lit’rally baked into a pumpkin. [Reichl] calls it a 'Swiss pumpkin.' I call it the best f%^ing thing I’ve ever eaten." Sounds like a plan!