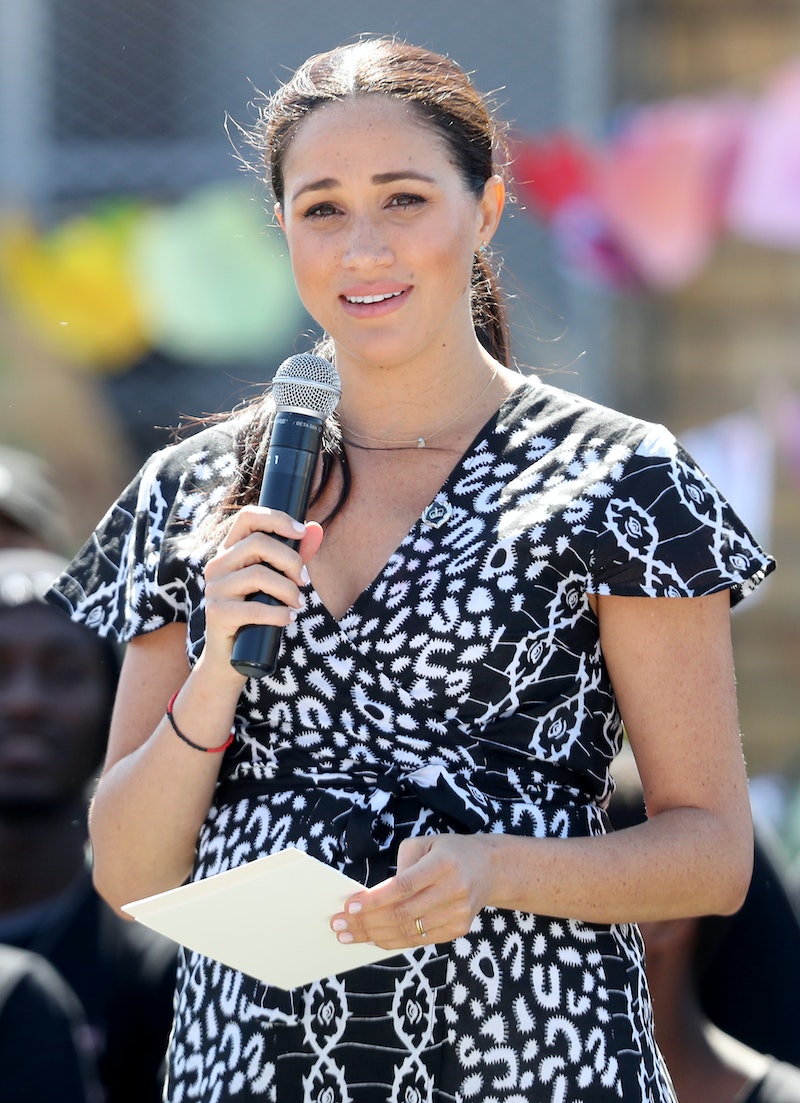 The Duke and Duchess of Sussex's tour of Africa has already gotten off to an impressive start. As BBC reported, while on their stop in Nyanga, Cape Town, South Africa, Meghan Markle gave a speech calling for an end to sexual violence against women, particularly women of color. And it wasn't the only major moment from the royal family's first stop on their grand tour of the continent.

On Monday, Sept. 23, the Sussex family arrived in South Africa and promptly visited the Justice Desk center in Nyanga (which is an NGO supported by the Queen's Commonwealth Trust), an organization that serves as a support to children and female empowerment. According to BBC, Markle took some time to honor the center by highlighting all of the important work they've done. She started off her speech by displaying her solidarity with the women of South Africa, "I am here with you as a mother, as a wife, as a woman, as a woman of color, and as your sister."

In her speech, Markle also stressed that she is there to support the community and is thrilled to be able to tour around the country alongside her husband (and baby Archie). "I am here with you and I am here for you and I thank you so much for showing my husband and I the spirit of Ubuntu and I look forward to our time over the next few days together," she said.

The duchess went on to say (as seen in the InStyle video below) that she and her husband have been "closely following" what the women of South Africa have been experiencing. Markle explained,

"The work that's being done here is to keep women and children safer, which is needed now more than ever, this is an issue which has been at the forefront of people's minds here in South Africa and of course across the globe particularly over this past month."

Just as she mentioned in her speech, the issue has been at the forefront lately, especially as the country has seen a distressing rise in violence against women as of late. In early September, thousands protested around the country in response to that rise, according to The Guardian. Seeing as though Markle and Harry's visit has come in the midst of this crisis, it was especially necessary and important to see the duchess address the matter in such a direct way.

As for the prince, he also gave a speech while in South Africa that touched upon issues regarding violence against women and toxic masculinity. According to People, Harry said that the world's focus should be on creating "positive change" for the future, and more specifically, "creating your own footprints for your children to follow in." He then went on to say share an incredibly sweet message about his role as a husband and father:

"To me, the real testament of your strength isn’t physical, it’s what’s up here and what’s in here. Your strength is in your spirit, which for me means honoring and protecting my wife, and being a positive role model for my son.”

Contrasting the more serious topics of their speeches, the tour has already had its share of lighter moments as well. Not only was the couple greeted by cheers from their fans upon arrival, Markle and Harry also got their dance on, as seen in a video shared by Good Morning America's royal contributor, Victoria Murphy.

On Sept. 6, the Sussex Royal Instagram account detailed some of the causes and organizations that the duke and duchess would be supporting over the course of their 10-day tour of South Africa, Angola, Malawi, and Botswana. Their tour already got off to such a powerful start, and based on the other issues they will be focusing on (such as the environment, HIV/AIDS, and mental health), it looks like the meaningful moments have only just begun.

More like this
The Royals Publicly Reach Out To Meghan Markle On Her Birthday
By El Hunt
Tyler Perry’s Birthday Note To Meghan Markle Mentioned Struggles She’s Overcome
By Brad Witter
Beyoncé & Madonna’s “Break My Soul” Remix Honors A Group Of Black Icons
By Stephanie Topacio Long
Gassed Up Promises All Things Action, Risk, & Redemption
By Frances Stewart
Get Even More From Bustle — Sign Up For The Newsletter