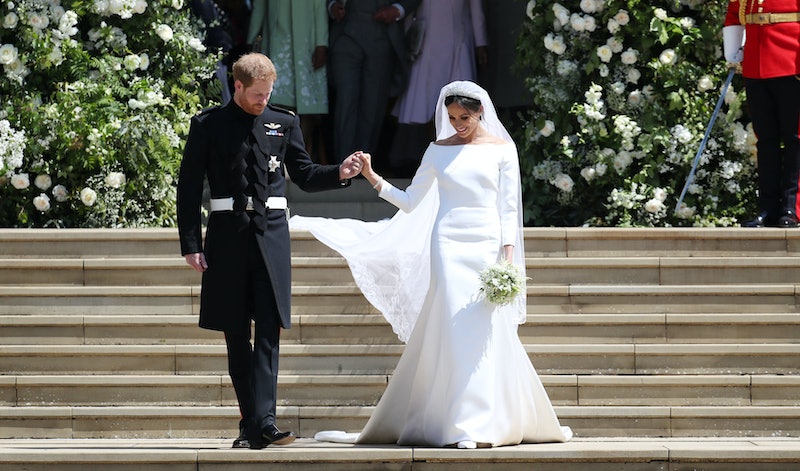 As soon as Prince Harry and Meghan Markle's engagement was announced, speculation as to what the future princess would wear was rife. Would she go billowy and dramatic, or simple and elegant? On the day she satisfied expectations with a streamlined Givenchy gown, making Harry and the whole nation go gooey eyed as she swept up to the church in its gorgeous white silk. If the drama is still playing on your mind, you'll reportedly soon be able to see it up close for yourself, as word has it that Meghan Markle's wedding dress will be exhibited at Windsor Castle at the end of this year.

Sources close to the royals ignited rumours that the gown would be available on display to the public, and The Royal Collection Trust just confirmed to the Daily Express that any official announcements would be made later this year. According to reports by the newspaper, it's possible that the £200,000 dress will be the centre of an exhibition to take place at Windsor Castle, where Harry and Meghan married in May. It's no surprise, seeing as the Queen's Berkshire residence has experienced a surge of visitors since the wedding, so it makes sense to feature part of the star attraction.

Windsor Castle has since become a scene for the world's fantasies and fairytales to take place, and that's especially so for tourists from the U.S. According to The Telegraph, the British Tourist Board expects to see a 15 percent rise from Stateside tourists, which is estimated to add around £3.5 billion to the economy — that's an unimaginable amount of chicken nuggets, am I right?

If the dress does go on display, those numbers should be set to rocket. Although you got a glimpse of it on your TV screen, you won't have had the chance to appreciate the hundreds of hours of work that went into creating the deceptively simple gown. And it might have looked big on your TV, but that 16ft train will look a million times more magnificent in person. Clare Waight Keller, the creative director of Givenchy, told The Telegraph that after Harry saw the dress, he bounced up to her and thanked her like an overexcited puppy, saying, "Oh my god, thank you, she looks absolutely stunning." Meghan will be following in the footsteps of Kate Middleton if the dress go on display, as the latter's McQueen design was exhibited at Buckingham Palace shortly after her own nuptials, as the BBC reports.

You're sure to be similarly stunned yourself if the dress does end up on display, but demand is bound to be very high. And with the wedding of Princess Eugenie and Jack Brooksbank set to take place at the same royal residence in October, expect to be one of a great many who are keen to walk in the footsteps of royalty. While you can still catch a glimpse of Princess Diana's threads at Kensington Palace, or see a variety of royal dresses throughout the ages at Fashion Museum Bath— you'll just have to wait a little longer to see the latest addition to a spread of iconic royal gowns and garments.