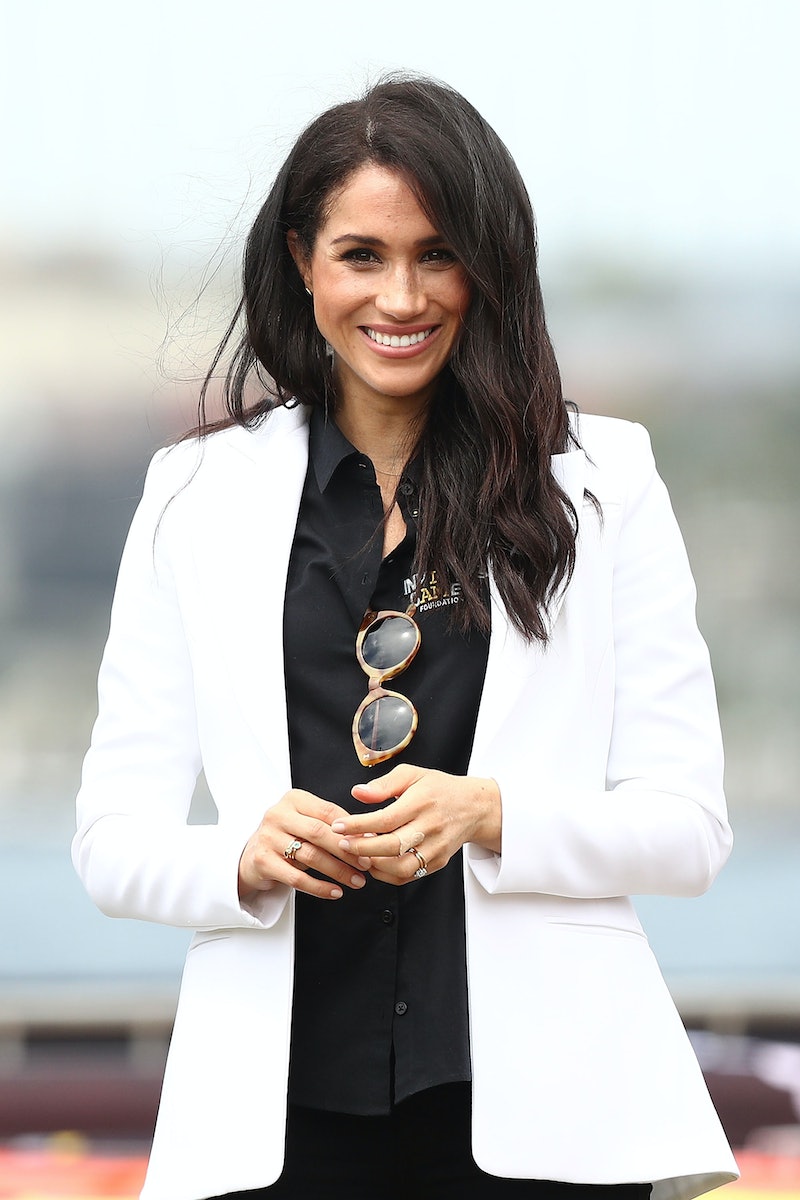 It turns that even the Duchess of Sussex can’t resist a pair of clean white sneaks. For the first time since officially becoming a part of the royal family, Meghan Markle stepped out wearing a pair of trainers and — like the rest of her fashion choices — they’re utterly chic. As is generally the case with the royal’s wardrobe, Meghan’s sartorial choice went beyond simply just aesthetic reasons as she chose to highlight a sustainable shoe brand and I’m giving her two green thumbs up. So, what are Meghan Markle’s white trainers? They’re from a brand you may not have heard of before, but I’m sure you’re going to fall in love with. (I already have, TBH.)

Meghan opted to wear shoes from a French brand called Veja, which prides itself on its eco-friendly ethos and vision which "combines fair trade and ecology and links together economy, social initiatives and the environment." Her choice of Veja kicks is a little break in royal tradition, as previously royals like Kate Middleton and Princess Diana have preferred to wear Supergas and I’m here for this greener shift. Favoured by the street style set, I've definitely seen more Vejas than I can count at fashion week.

Meghan wore the trainers during a sailing event in Sydney during the Invictus Games, a sports tournament spearheaded by Prince Harry for injured servicemen and women. It’s pretty cool because the specific trainers she’s wearing, the Esplar Leather White Trainers in Black, are actually named after the Brazilian NGO which supports the organic cotton farmers which supply the brand. Beyond its organic cotton lining, its sole is made of "wild rubber from the Amazonian forest" and vegetable-tanned leather to diminish the impact that chemicals used in the tannery business has on the environment.

The brand has been pretty popular with fashion influencers and celebs, which isn’t surprising because they’re cool AF. It’s awesome to see Meghan Markle continuing her commitment to a more eco-friendly wardrobe as in the past, she’s worn pieces by other environmental brands like Stella McCartney and Theory. Here’s where to get Meghan’s Veja trainers and I’ve thrown in some other eco-friendly trainers that won’t break the bank below.

Esplar Leather White Trainers in Black
Veja
These are the exact match for Meghan Markle's white trainers and an instant classic. Using sustainably sourced and eco-friendly materials including organic cotton, vegetable-tanned leather and wild rubber soles, they're a pair you and the Duchess will be reaching for again and again.
Smart Wooler Trainers in Middle Grey
Baabuk
Wool isn't usually a popular option for trainer uppers, but these Baabuk ones have won me over. A certified B-Corp company, they ensure their employees in Nepal make 25% more than the average salary and all of their natural Portuguese wool is totally muesling-free from 'healthy happy sheep'.
Cabo Tan Trainers
The People's Movement
These cute knit trainers are made from a breathable vegetable cotton and, like the rest of The People's Movement products, are proudly vegan. Using natural dyes, water based glues and nickel-free eyelets, they're thoughtfully made and we stan.
adidas x Stella McCartney White Ultra Boost Trainers
Stella McCartney
Another one of Meghan Markle's favourite fashion brands, Stella McCartney's ongoing fashion collaboration brings the designer's love of vegan and eco-friendly materials to the table. If you have more cash to splash, these trainers are made from recycled polyester and use Parley Ocean Plastic: plastic which has been recycled from marine pollution.
Butterfly White Unisex High Top Trainers
Po-Zu
If you love your classic white Converse but want to gradually shift in the eco-friendly direction, these Po-Zu high tops are a great homage to the classic style. This vegan shoe is made from locally sourced Fair Trade rubber, organic cotton and has a foot-mattress made from coconut husks and natural latex.
Burgundy Join Life Trainers
Pull and Bear
These simple lace-up trainers from Pull&Bear are part of their Join Life collection, a line which aims to use only the 'best sustainable raw materials'. These are made from ecologically grown cotton and a fibre called TENCEL lyocell, a wood-based material from sustainably-managed forests.
More like this
The Royals Publicly Reach Out To Meghan Markle On Her Birthday
By El Hunt
5 Striking Parallels Between Diana & Meghan's Post-Royal Interviews
By Sophie McEvoy and Sam Ramsden
Linda Evangelista Leads Tributes To Iconic Fashion Designer Issey Miyake
By Sophie McEvoy
Lewis Hamilton Turned Down A Role In 'Top Gun: Maverick' For This Surprising Reason
By Darshita Goyal
Get The Very Best Of Bustle/UK