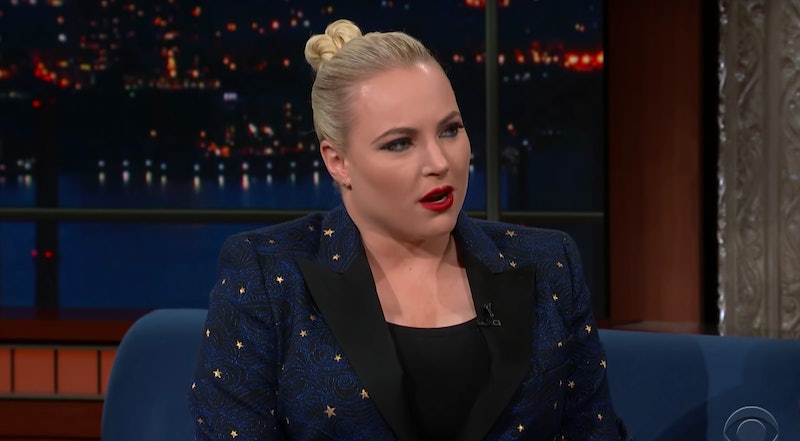 Ivanka Trump and Jared Kushner attracted attention last September when they chose to attend John McCain's funeral even though President Donald Trump wasn't invited. As it turns out, the late senator's daughter was not happy about their decision. In a Thursday interview with Stephen Colbert on The Late Show, Meghan McCain explained her feelings about the Trump family with a Cardi B quote.

"I really want it made very clear that the Trumps had beef with me then, and in the words of Cardi B, they're 'going to have beef with me forever,'" McCain told Colbert, referencing the rapper's iconic confrontation with DJ Self on the TV show Love & Hip Hop: New York. Cardi B further popularized the line when she worked it into her 2016 song "Foreva."

"I'm not going to forget," McCain continued on Thursday. She explained that she would have preferred it if Ivanka and Kushner had stayed home. "It's sort of a strange element to my life now, that they attended," she said. "I wish they had chosen not to — out of respect, if nothing more, for me. But it's their call, and I think America can judge on its own what they thought of that."

The late senator was famously a critic of the president. He condemned the remarks Trump made about Mexican immigrants just after announcing his presidential bid, and things only escalated from there. Trump suggested in July of 2015 that the senator was "not a war hero" because he had been captured by the North Vietnamese during the Vietnam War. While the senator initially endorsed Trump's run, he ultimately withdrew his support after the Access Hollywood tape scandal. Then he continued to criticize Trump while the president was in office and acted as one of a few key votes that stopped the repeal of Obamacare.

The McCain family specifically did not invite Trump to his funeral, even though three former presidents did attend (both President Barack Obama and President George W. Bush gave speeches honoring the late senator). So it came as a surprise to many when the first daughter and her husband showed up. According to The New York Times' Katie Rogers, Sen. Lindsey Graham (R-South Carolina) invited them because he thought it would serve as a "nice gesture."

McCain recently admitted in a Porter interview that she hadn't known that Ivanka and Kushner would attend, and she reiterated that to Colbert on Thursday. "No, I did not know," she said. "A funeral is obviously a sacred time, and I thought that my family had made it clear — or at least I had — that the Trumps are unwelcome around me, and that my father had been clear about the line between the McCains and the Trumps."

She added that their presence made her "uncomfortable," and that "I hope I made them uncomfortable, honestly." McCain peppered her eulogy at the funeral with both subtle and overt critiques of the president.

"The America of John McCain has no need to be 'made great again,'" she told the audience, "because America was always great."