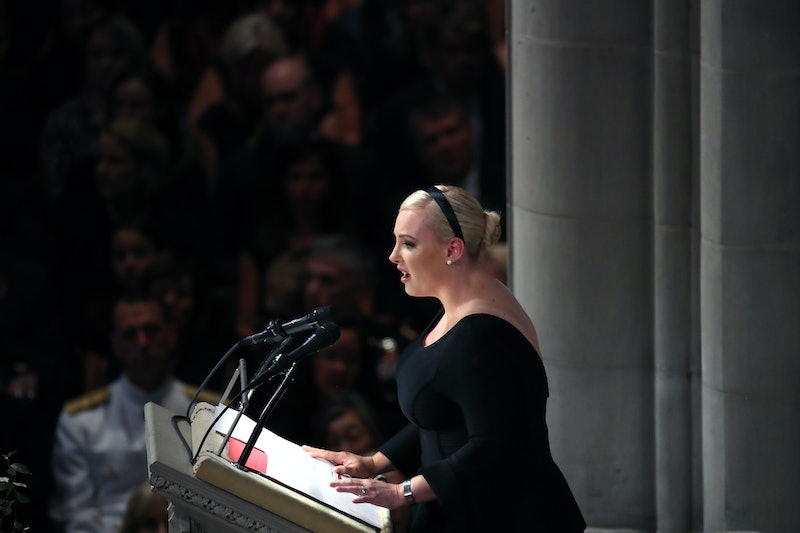 At John McCain's funeral in September 2018, his daughter delivered a passionate eulogy focused on her father’s legacy while indirectly criticizing President Donald Trump. Though Trump did not attend the funeral, Ivanka Trump and Jared Kushner did. Meghan McCain, however, told Porter magazine recently that she had no idea that the first daughter and Trump's son-in-law were in the crowd.

"I didn’t know they were coming, I didn’t know until I saw them there," McCain told the publication. "I looked over and saw them and well … they got to listen to what I had to say."

Although McCain did not name Trump directly, she made multiple pointed references to the president, who frequently disparaged her father while he was alive. In one instance, at the Family Leadership Summit in Iowa in 2015, Trump mocked John for being captured and kept in a Vietnamese prison from 1967 to 1973.

"He’s not a war hero," Trump said that year. "He was a war hero because he was captured. I like people who weren’t captured."

In her eulogy for her father, McCain said that her father stood against "the opportunistic appropriation of those that live lives of comfort and privilege," which some observers viewed as an indirect yet forceful rebuke of Trump.

At one point in her eulogy for her father, McCain made a clear reference to Trump's "Make America Great Again" slogan. "The America of John McCain is generous and welcoming, and bold. She is resourceful, confident, and secure," she said.

"America does not boast because she has no need to," she added. "The America of John McCain has no need to be made great again because America was always great."

She also mentioned her father's struggles in Vietnam, where he had been tortured as a prisoner of war, saying that he reminded her to "be strong." McCain noted, "John McCain was not defined by prison, by the Navy, by the Senate, by the Republican Party, or by any single one of the deeds in his absolutely extraordinary life. John McCain was defined by love."

While Trump was not present at the funeral, he gave an official statement on John McCain's death. "Despite our differences on policy and politics," Trump said, "I respect Sen. John McCain's service to our country and, in his honor, have signed a proclamation to fly the flag of the United States at half-staff until the day of his interment."

In November, John's wife, Cindy McCain, told the BBC about her decision not to include the president in the list of people attending her husband's funeral. "Even though it was a very public funeral, we are still a family," Cindy said to the network. "It was important to me that we kept it respectful and calm and not politicize it."

She said that Trump's disparaging commentary about her husband had upset the family. "I don't know if I'll ever get over it; I'll be honest," Cindy told the BBC. "But I’m the wife. That’s my prerogative. I don’t have to."