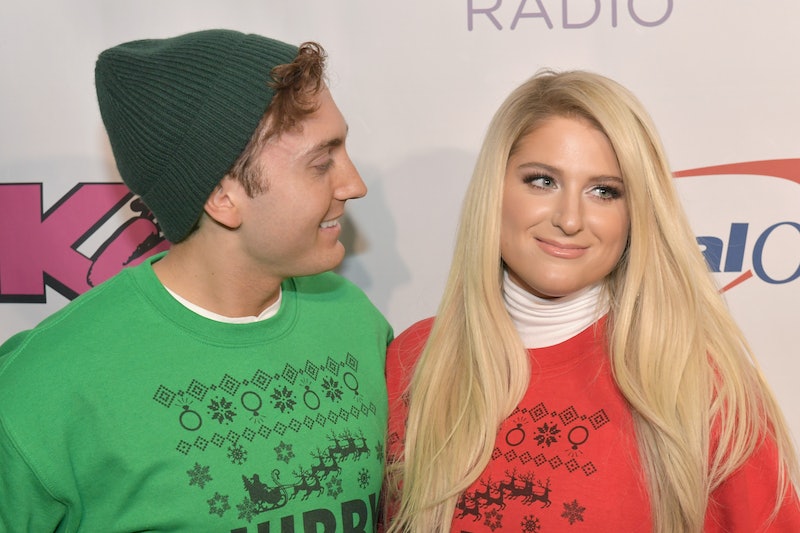 Once upon a time — summer of 2016, to be exact — in a land far, far away (well, depending on which coast you live on), two young stars were set up by one of their very famous mutual friends. Now, the pair is married, but Meghan Trainor and Daryl Sabara's first date was surprisingly low key, People reported.

So, the first thing you should probably know is that Trainor and Sabara were set up by Chloë Grace Moretz. Fun fact, right? "I asked [Moretz] to set me up on a date with the nicest guy ever," Trainor explained during the recent interview. "And she was like, 'Well, that’s my friend Daryl.' It was kind of like a middle school date."

And what does that mean, exactly? To go on "a middle school date"? Well, for starters, they weren't alone. Like, they basically had chaperones. Trainor and Sabara' first ever date was actually a double date with Moretz and her then-boyfriend Brooklyn Beckham, People revealed.

The other thing that might have made their first date feel so middle school-esque was probably the agenda for the night: bowling and karaoke. Both bowling and karaoke can be fun as hell no matter how old you are, but they do tend to draw a younger crowd sometimes.

"He kissed me at the bowling alley," Trainor told Cosmopolitan back in 2017. "I told my security to step outside 'cause I didn’t want to be watched. LOL. He was the best kisser ever. I know I’m really good at kissing, but I was shocked when he was."

As for the karaoke portion of the evening, "I thought, 'I’m gonna karaoke with a Grammy winner — this’ll go over well!" Sabara joked with People. "We had a great night, and I’ve hung out with him every day since," Trainor added.

Oh, by the way, fellas — if you want to try to woo a lady with your karaoke skills one of these days, maybe take a page out of Sabara's book. He sang Elton John's "Your Song" for Trainor and obviously nailed it.

It didn't take long for Trainor to decide that Sabara was the one, she admitted to People, and even ended up bringing him on tour with her one month after they met. Wow, that's commitment. Have you ever seen how small those tour bus bunks are?

“I definitely was positive month one when he was on tour with me, and we were like basically living together on the road," Trainor admitted to People. Sabara chimed in as well, explaining,

"It’s super cheesy, but when you know, you know. As soon as she walked in the room and I saw her, I just knew: This is the one. Everything about her. We went from zero to 60, and I went on the road with her, and you really get to know somebody on a tour bus. But we just love everything about each other and are really good communicators."

Ugh, swoon. These two are just the cutest. They ended up tying the knot on Dec. 22, and it sounds like they're well on their way to a lifetime of bowling and karaoke together.

More like this
Lisa Marie Presley Reviewed Baz Luhrmann’s ‘Elvis’ Movie On Twitter
By Grace Wehniainen
What Is Barack Obama’s Net Worth? He Makes *Way* More Now As An Ex-President
By Hugh McIntyre
Twitter Is Upset About The 'American Idol' Top 3 Results: "Who TF Is Voting?"
By Jake Viswanath
Everything We Know About Chèrie & Jessey’s Abrupt Exit From Bling Empire
By Alyssa Lapid
Get Even More From Bustle — Sign Up For The Newsletter