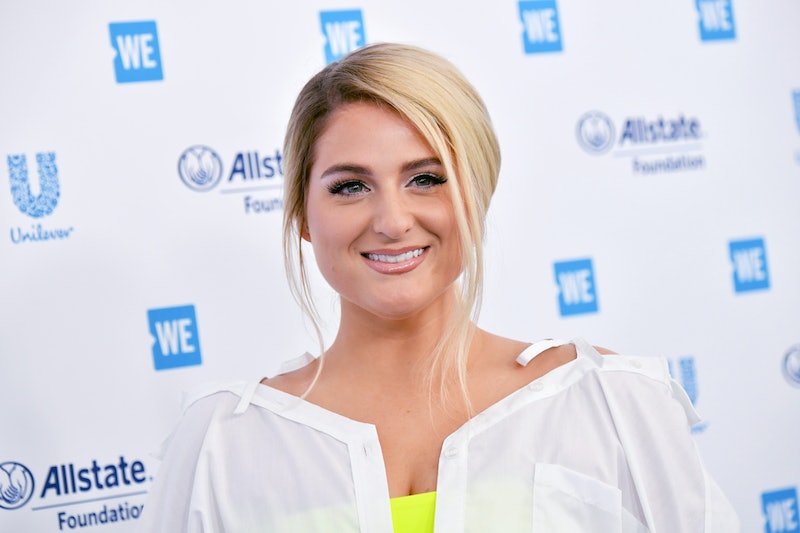 Just call this the one with the Rembrandts cover: Meghan Trainor covered the Friends theme song in honor of the show’s 25th anniversary on Sept. 22. In the ultimate nod to the sitcom’s New York City backdrop, Trainor offered a rendition of the Rembrandts’ iconic “I’ll Be There For You” in conjunction with a video of a light show on the Empire State Building, which had been illuminated by red, yellow, and blue lights to reflect the series’ logo. Trainor announced the cover on Twitter on Sept. 22 and revealed that the series is “one of my fav shows of all time.”

Accompanied by art that resembles the series' gold picture frame on Monica Geller’s purple apartment door, Trainor wrote on Twitter, “YOOO tune into @Z100NewYork tonight at 8:30pm to catch the world premiere of my cover of @The_Rembrandts “I’ll Be There for You”. I’m so excited! @FriendsTV is one of my fav shows of all time.”

In a Sept. 16 interview with Rolling Stone, Trainor spoke about being approached by Warner Bros. for the track. “I’ve seen every episode multiple times now,” she said. “I can’t believe they even thought of me to sing this cover. It was a dream come true.”

Trainor also revealed that she had enlisted her family to provide background vocals for the song. “I actually cut the vocals in my backyard in my studio, with my little brother, my older brother, my husband, and my best friend,” Trainor told Rolling Stone. “And we were just all laughing and in disbelief. Like, ‘How is this really happening?’ It was a big party, the best night.”

The theme song was co-written by the Rembrandts, Friends creators Marta Kauffman and David Crane, Kauffman’s husband Michael Skloff, and Alee Willis. “I hope I make them proud,” Trainor added. “Because they’re the ones that wrote this beautiful song and they’re legends.”

Trainor’s cover comes on the heels of many other celebratory homages for the sitcom’s anniversary: In New York, an immersive Friends-themed pop-up emerged that allows fans to visit a recreation of Central Perk and lounge in Joey and Chandler’s La-Z-Boy recliners; Pottery Barn has unveiled a Friends-themed collection of home decor; TBS has debuted a Friends marathon through September; and Lego has even released a special-edition Friends set.

While Trainor's "I’ll Be There For You” cover now cements her place in the Friends pop culture landscape, the singer also has another unexpected connection to the show. Her actor husband Daryl Sabara guest starred in the final season of the show (Season 10, Episode 2’s “The One Where Ross is Fine") as Owen, a young boy who unwittingly learns that he’s adopted after Chandler spills the beans. “When he showed me that episode and I remembered it was him, I freaked out,” Trainor said in her Rolling Stone interview. “It plays on airplanes when we travel, and we always pop it on and we still scream every time.”

With “I’ll Be There For You” under her belt, here’s to hoping that Trainor will tackle “Smelly Cat” next.