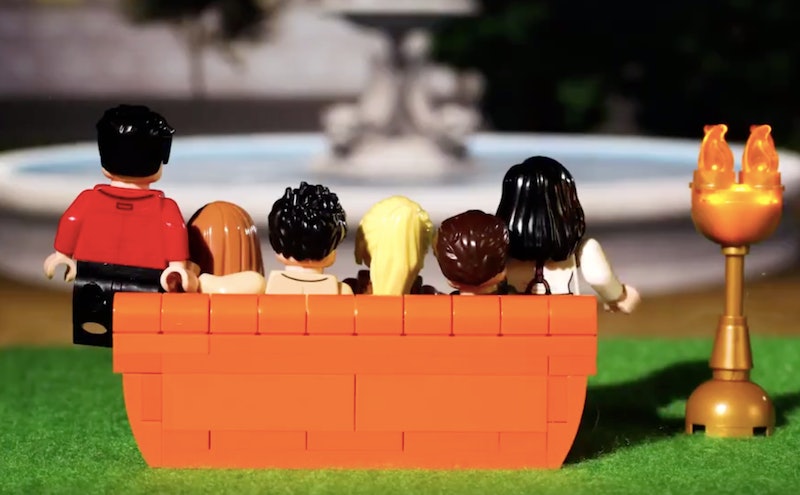 You may have noticed a plethora of Friends products hitting the market in the past few weeks, courtesy of the beloved sitcom's 25th anniversary. As it turns out, the party's still going, and the latest brand to join in might be one that you would expect — LEGO teased a Friends-inspired set on Twitter on August 6. Well, to be more clear, LEGO shared an image of what is unmistakably the iconic Friends gang on Twitter, along with the caption "The one with LEGO bricks," a winking emoji, and the words, "Coming soon," which pretty much directly translates in millennial to "We're about to drain your bank account for this thing that you don't need, but will definitely buy in a heartbeat."

The image depicts the back of LEGO Monica, Rachel, Phoebe, Ross, Chandler, and Joey all perched on the couch in front of the fountain featured in the show's opening credits, with Monica even flicking off a LEGO lamp. It doesn't reveal any kind of release date aside from the "Coming soon" message — Bustle has reached out to LEGO, and will update this post upon response — but it's probably safe to assume it will come before or around Sept. 22, which will mark the exact 25th anniversary of the airing of the first episode.

This image, of course, leaves us with a lot more questions beyond the timing of its release, or what exactly it will entail. Namely, if it does come with LEGO figures based on the legendary Friends gang, which haircuts will they have? As fans of the show and most humans who lived through the '90s are aware, it was an emotionally rollercoaster of hair trends, the peak of which was undoubtedly The Rachel — a haircut made so iconic by Jennifer Aniston's head that it remains part of the cultural lexicon to this day. How, dare I ask, will one manage to capture the essence of this haircut in LEGO form?

I have other questions — namely, whether LEGO will include an apothecary table in whatever it is the company is poised to release — but while those remain unanswered, there are plenty of other ways Friends fans can pass the time while we wait. For instance, Pottery Barn just released its own Friends collection; Coffee Bean & Tea Leaf released a bunch of drinks based on the beloved characters, as well as its own line of Central Perk coffee and tea; Hot Topic got in on the fun with a bunch of Friends goods and homewares; and there's even a Central Perk pop-up opening in New York later this year. It is truly a year to be young and alive and unrepentantly still streaming Friends on Netflix over and over and over despite the millions of hours of new original content to be created since. Keep your eyes peeled for whatever it is LEGO has on the way — odds are, given the timing of the anniversary, it will be sometime in late August or early September.