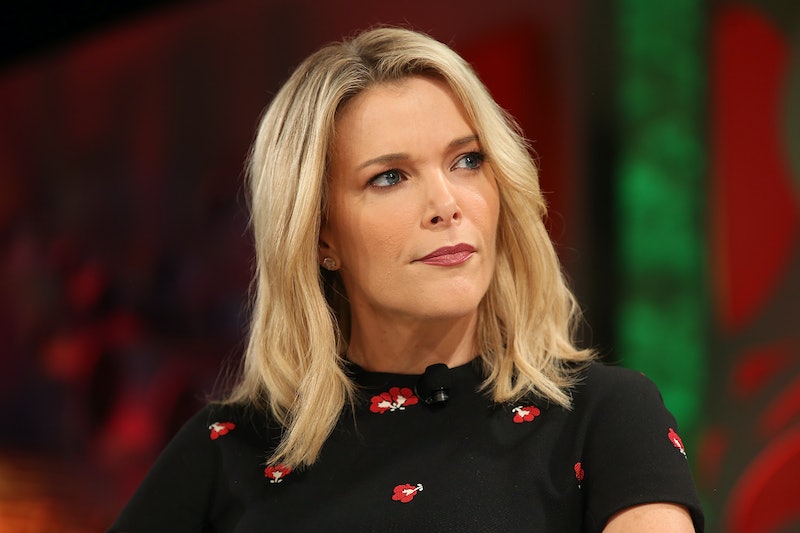 Nearly four-years after the scandal first broke, Megyn Kelly reacted to watching Bombshell, a film based on the true story of the women working at Fox News who exposed CEO Roger Ailes' alleged sexual harassment. On Sunday, Kelly posted a photo of the Bombshell movie poster on Instagram, sharing a few thoughts about the film.

Kelly revealed that while at the movie theater to see Frozen 2, her son stopped in front of the Bombshell ad, which "confused him because it appears to show a picture of me." In the film, Charlize Theron wore "intricate" prosthetics to embody Kelly, as per People, and the result is uncanny. The movie also stars Nicole Kidman as Gretchen Carlson, who first alleged sexual harassment from Ailes while at Fox News, and Margot Robbie, as a fictional producer who also comes forward.

Despite describing viewing the film as an "incredibly emotional experience", Kelly noted she was not involved in the film's production, writing, "nothing to do with this film," and "only got my first look at the film once it was past the point of any possible edits, though there are certainly some I would have made."

Kelly went on to share how, despite not being involved in the film, she hoped the story might comfort victims of sexual harassment. "Sexual harassment is pervasive in this country; it can leave scars that do not heal," she wrote. "My heart goes out to those who’ve gone through it, who I hope might find some comfort in this story."

In Nov. of 2016, Kelly published a memoir titled Settle For More, in which she documented the alleged sexual harassment at Fox News. Kelly described one alleged encounter with Ailes, as per Refinery29, writing, "I was nervous about going into his office, concerned he might start in again. Sure enough he did. And then he crossed a new line — trying to grab me repeatedly and kiss me on the lips."

The work culture at Fox News came under new scrutiny in July of 2016, when Gretchen Carlson filed a lawsuit accusing Ailes of sexual harassment, as per the New York Times. Her lawsuit exposed the boy's club environment at the network, and resulted in over a dozen more women coming forward with allegations of sexual harassment and racial discrimination at Fox News, according to The Times.

On Instagram, Kelly noted that her book did not play role in production, writing, "I did not sell the rights to my story or book", and told followers that she would share a more in-depth reaction to the film soon.