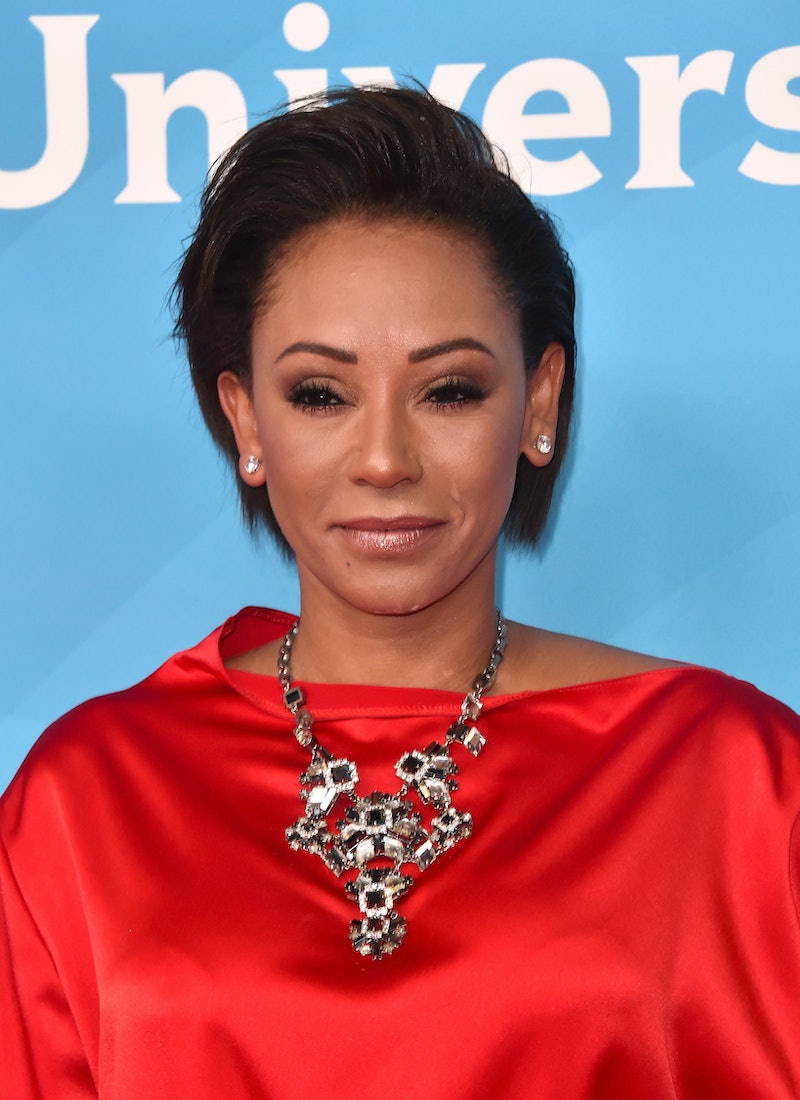 Over the weekend, a 2014 clip resurfaced on Twitter that appears to show former U.K. X-Factor judge Louis Walsh allegedly grabbing Mel B's butt on live television, as reported by E! Online. And while the incident itself happened several years ago, it didn't take long for Twitter to profess its collective outrage over the extremely awkward exchange. (Bustle has reached out to both Mel B and Walsh's reps for comment about the matter, but had yet to hear back at the time of publication.)

The video footage, which was uploaded to YouTube back in December 2014, comes from an interview that took place between The Xtra Factor's Sarah-Jane Crawford and Walsh, Mel B, Simon Cowell, and Cheryl Cole. At one point during the conversation, Walsh's hand can be seen on Mel B's butt and it remains there until a very uncomfortable looking Mel B calls him out for it.

"Why are you grabbing my butt?," she's seen asking him, right before moving further away from him and out of reach. Walsh was quick to respond to her remark, stating that he was "looking after" her while Crawford attempted to pass it all off as a joke, telling Walsh to keep his "hands where we can see them please!" Cowell also chimed in with a comment of his own, assuring Mel B that she had nothing to worry about, saying that, "Honestly, you're safe."

Mel B's shocked expression over the whole thing indicates that she may not have felt quite as safe as she would've liked, and Twitter immediately rallied behind her. Many praised Mel B for standing up for herself and calling Walsh out for his alleged actions, regardless of how long ago this happened.

"Man Louis Walsh touching Mel b like that is so not ok," Twitter user @lennytrollip17 wrote. "If he has the balls to do something like that in public. God knows what hes up to in private. Good stuff for mel not havin it tho. Everyone keep ur hands to urself smh."

Another user, @fakelovebegone, was shocked by the footage and wondered how often stuff like that goes unseen, writing, "What a creep...... Louis Walsh gropes Mel B on TV Can you imagine how much of this goes on when the camera is off??? It's an old clip but still NOT OK."

Other users like @TheGalWithAFro found themselves relating closely to Mel B, having gone through something similar themselves, stating: "I saw the Mel B video and I'm upset. We have all had strange men touch us without our consent and everytime you react they make it seem like you're overreacting or it want intentional. Man, how TF do you grope my ass by mistake?"

There were, however, other who were just as quick to come to Walsh's defense, insisting that Mel B had overreacted and embarrassed the guy on live TV, which prompted some users like @tugengirl to clap back with their own opinions on the matter:

"This man grabs Mel B's butt on live TV & there are men in the comments arguing she overreacted, handled it badly, that she embarrassed the man, that they miss the old days. Wow. Just wow. Many men still defend even live examples of sexual harassment."

This resurfaced video once again brings up the larger problem of workplace harassment. As reported by NPR, an online survey conducted by the nonprofit Stop Street Harassment found that 81 percent of women and 43 percent of men have experienced some form of sexual harassment. Furthermore, the report found that 51 percent of women have been "sexually touched" without permission. While, Mel B's co-stars tried to diffused the situation on-camera and assure her of her safety, unwanted touching is clearly a problem, and it's one that shouldn't be dismissed lightly.

Twitter user @scottam2 highlighted this reality in their tweet. They found the other judges' reactions to be just as upsetting as the act itself, writing:

"Want to see why the #MeToo movement is needed? This clip is from 2014, nothing was very done. The guy giving Mel B’s ass a tap, jiggle, and squeeze is still on the show and thought it was funny he got caught. Scum. No one in the show said anything to him. Scum."

Hopefully Mel B will help clarify the situation and what she was feeling at the time of the interview, but it just goes to show how important the #MeToo and Time's Up movements are — and how much they were needed long before now.

More like this
Sandra Bullock, Girlboss Extraordinaire
By Matt Harkins & Viviana Olen
The 'Hocus Pocus' Sequel Finally Has A Release Date & It Makes Total Sense
By Shannon Barbour and Radhika Menon
The WAGatha Christie WhatsApp Messages Have Been Released — & They're Wild
By Sam Ramsden
Prince Harry Spoke Out About Archie & Lilibet’s Futures And What Worries Him The Most
By Sam Ramsden
Get Even More From Bustle — Sign Up For The Newsletter