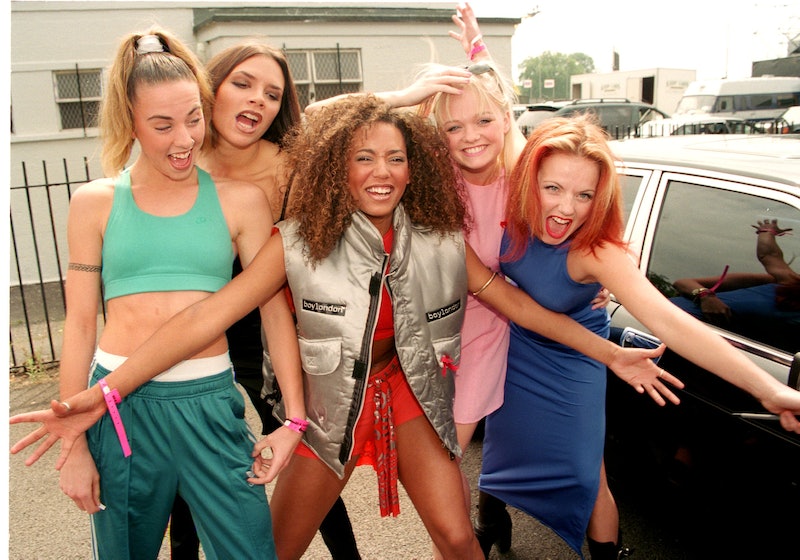 Following their sold out UK stadium tour, it's fair to say that the highly-anticipated Spice Girls reunion was a resounding success — and fans of the iconic girlband might have even more girl power to look forward to, because one band member is very keen on performing at one of the world's biggest music festivals. But will the Spice Girls play at Glastonbury's 50th anniversary? Here's everything we know so far.

According to Digital Spy, Mel B (or Scary Spice, as she's better known) revealed that the epic Spice Girls reunion might not be over just yet, because the "Wannabe" singer is determined to book a slot at the festival's 50th anniversary. During an interview with the Mail Online, Mel discussed her desire for the band to appear at Glastonbury's 50th anniversary in 2020, and again commented on bandmate Victoria Beckham's absence from the reunion tour. Speaking to the publication, she said, "I'm going to make sure there will be more," and continued, "Victoria is Victoria. She didn't want to do it. She missed out. But my plan is for all five of us to do Glastonbury next year for the 50th anniversary. I'm in the process of persuading Victoria to do it. And I will make it happen."

Throughout the interview, the "Spice Up Your Life" singer also discussed the ups and downs of her relationship with fellow bandmate Geri Horner, and revealed that one profound moment during the band's recent reunion tour "meant more" to her "than any of the other girls." Speaking to the Mail Online, she said, "Geri and I are in a good place now. On the last night at Wembley, Geri did something which, I think, meant more to me than any of the other girls. She said sorry for leaving the group back in 1998. We had been so close and then she just left and never really said why and never really said sorry until a few weeks ago."

So, it seems Horner's words at the reunion tour provided some much needed resolution between the pair, and speaking of what happened next, Mel went on to reveal, "She gave me a massive hug after she said it and both of us had tears in our eyes because we knew, deep down, it had needed to be said for a long time, something that had rankled between us."

As previously reported by Bustle, Victoria Beckham decided against taking part in the 2019 Spice Girls reunion tour. However, the mother-of-four did post a heartwarming message of support for her bandmate's upon the tour's announcement late last year. Speaking on Instagram, Beckham said, "I won’t be joining my girls on stage again but being in the Spice Girls was a hugely important part of my life and I wish them so much love and fun as they go back on tour next year. I know they will put on an amazing show and the fantastic fans past and present are going to have a wonderful time X vb #spicegirls."

So, although Beckham didn't appear this time around, there's always hope the Spice Girls will one day fully reunite — and the Glastonbury Festival's 50th anniversary would be the perfect setting for such a legendary moment.