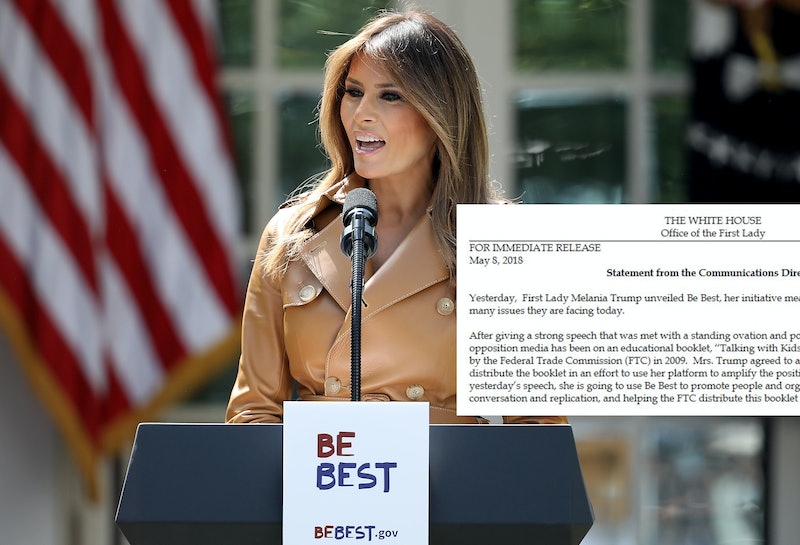 Following criticism online and in the media that she copied the first offering of her "Be Best" initiative, Melania Trump responded through a statement from her communications director. Stephanie Grisham criticized the criticism, calling out the "opposition media" and challenging journalists to "Be Best" in their work.

Grisham clarified the role that Trump saw herself taking in the work. "Mrs. Trump agreed to add Be Best branding and distribute the booklet in an effort to use her platform to amplify the positive message within," Grisham wrote. She called it one example of the first lady promoting "people and organizations to encourage conversation and replication." Grisham continued:

Despite providing countless outlets with ample background, information, and on-the-record comments from the FTC, some media have chosen to take a day meant to promote kindness and positive efforts on behalf of children, to instead lob baseless accusations toward the First Lady and her new initiatives.

The harshest part of the statement came at the end. "Our office will continue to focus on helping children and I encourage members of the media to attempt to Be Best in their own professions, and focus on some of the children and programs Mrs. Trump highlighted in her remarks yesterday," Grisham wrote.

On Monday, the first lady released a booklet on cyberbullying and other tech tips for parents to implement and speak about with children to keep them safe. Almost the entire thing was released under a different title in 2014. There have been a few minor edits and the addition of Trump's introduction in this version. Both were developed by the Federal Trade Commission (FTC).

Former First Lady Michelle Obama had promoted the prior version. The main controversy comes from the fact that the White House website introducing the initiative claimed that Trump had helped write the book, together with the FTC. The book was listed as "by First Lady Melania Trump and the Federal Trade Commission." That was later changed, following the criticism, to "a Federal Trade Commission booklet, promoted by First Lady Melania Trump."

The FTC also commented in the statement that they had no problem with the first lady helping promote their work. "As a small and independent civil law enforcement agency, the FTC encourages our partners to help spread our message to consumers," FTC Consumer and Business Education Division Associate Director Nathaniel Wood was quoted as saying. "We were excited that Mrs. Trump distributed this important information about staying safe online."

The pamphlet was uploaded to Trump's Be Best initiative website. She launched that publicly in a speech at the White House. "It remains our generation’s moral imperative to take responsibility and help our children manage the many issues they are facing today, including encouraging positive social, emotional, and physical habits," the first lady said.

The program will focus on children, particularly how they can take on cyberbullying, the opioid academic, and also maintain physical and mental health. "The mission of BE BEST is to focus on some of the major issues facing children today, with the goal of encouraging children to BE BEST in their individual paths, while also teaching them the importance of social, emotional, and physical health," the initiative's website reads.

The attacks on the media in Grisham's statement are not common from the first lady's office, except in criticism of coverage. "The laundry list of salacious [and] flat-out false reporting about Mrs. Trump by tabloid publications [and] TV shows has seeped into ‘main stream media’ reporting," Grisham tweeted in January about the coverage of Trump and the president's relationship.

More general attacks on "fake news" and the "opposition media" come from the president, particularly on Twitter. Perhaps he'll read the FTC booklet, now that the first lady has cleared up her endorsement of it.