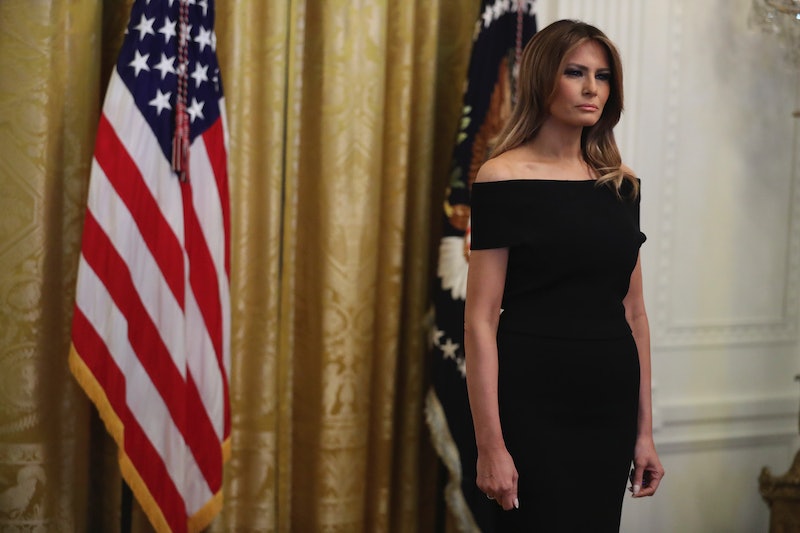 In a new poll from CNN released Thursday, first lady Melania Trump's approval rating fell by double digits. Trump's favorability is now at 43 percent, down 11 points from 54 percent in an October poll. On top of her plummeting favorability, 36 percent of people viewed Trump as unfavorable; this is a 6 percent increase since the last poll. The poll was conducted from Dec. 6-9 among 1,015 people with a margin of error of plus or minus 3.8 percent.

Trump's favorability rating had been relatively high in 2018. In fact, in the May poll by CNN and SSRS, Trump's favorability peaked at 57 percent — the highest in 2018 and since they started polling the question in late February 2016. The May poll came after Trump attended former First Lady Barbara Bush's funeral solo and co-hosted a state dinner for French President Emmanuel Macron.

The six-point increase in her unfavorable rating is cresting toward her highest unfavorables, which peaked at 38 percent unfavorable in April 2017 and October 2016 in former CNN and SSRS polls. You can read the poll's full results here.

Among Republicans, Trump has a 77 percent favorability rating compared to a 9 percent unfavorable rating as measured by Thursday's CNN and SSRS poll. Among Democrats, the poll found the numbers almost reversed with 16 percent of Democrats surveyed found Trump favorable, while 67 percent found her unfavorable.

Trump has made more public appearances as of late. She's publicly received the White House Christmas tree from a horse-drawn carriage from North Carolina, and she attended the Christmas tree lighting ceremony in late November with the president. On Nov. 28, Trump gave a speech at Liberty University in Lynchburg, Virginia, and did a Q&A with ex-Fox News personality Eric Bolling.

"When I took on opioid abuse as one of the pillars of my initiative 'Be Best,' I did it with the goal of helping children of all ages," Trump said on Nov. 28, according to CNN. "I have visited several hospitals and facilities that are dedicated to helping all who have been affected by this disease, including people who are addicted, babies born addicted and families coping with addiction of a loved one."

Trump also accompanied President Donald Trump to the G20 summit in Buenos Aires, where she met with numerous wives and significant others of other world leaders.