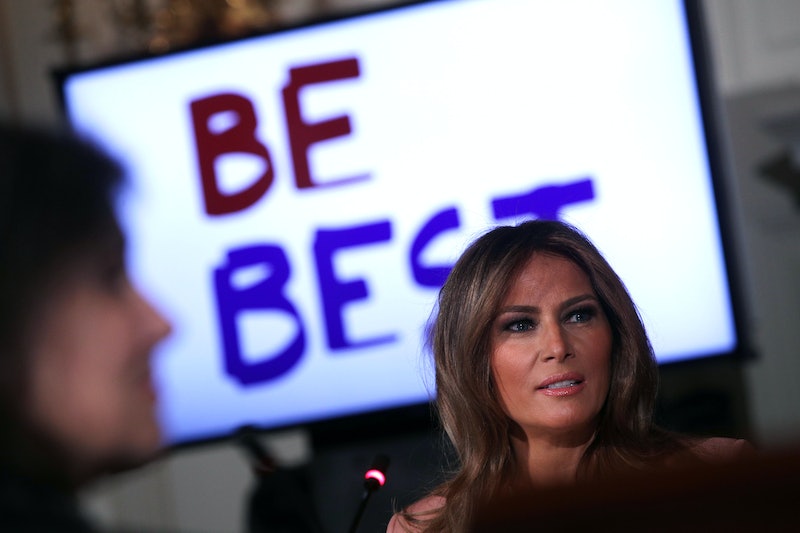 Almost a year has passed since the first lady of the United States launched her youth wellness program better known as "Be Best." Marking its one-year anniversary, Melania Trump will host an event at the White House on May 7. According to The Hill, Trump is expected to introduce three guests at the program's anniversary, though it's unclear who exactly these individuals are.

"I am looking forward to this celebration," the first lady said in an official statement on Thursday. "Next week will not only be an opportunity to thank so many leaders and innovators for their contributions to making 'Be Best' a success, but a chance to come together as a community and set plans for expanding the initiative in the coming year as we work towards building a greater future for our children."

The White House published a press release for the upcoming event and gave a clue as to who the three guests will be. Although the release doesn't mention names, it states that these people "represent one of the three pillars of [Trump's] initiative." Those three pillars are well-being, opioid abuse, and social media use, according to The Washington Post.

A reception is expected to take place in the Jacqueline Kennedy Garden, according to the first lady's press office.

The first lady has been actively promoting her Be Best program across the United States. In March, Trump went to Las Vegas where she discussed opioid abuse at a town hall meeting — and gave some advice to the news media. "I challenge the press to devote as much time to the lives lost [by drugs] and the potential lives that could be saved by dedicating the same amount of coverage that you do to idle gossip or trivial stories," the first lady said in March.

During the same trip, Trump visited Microsoft's Seattle executive campus and talked about improving online safety for children. The tech company's officials showed the first lady how parents could control safety features for children who were often online.

"I feel that sometimes children know more than their parents," Trump said at the meeting with Microsoft's president Brad Smith, CNN reported. "Parents need to watch what children do to make it safe."

While the first lady has managed to impress some people with her Be Best campaign around the country, she has been criticized as well. As ThinkProgress reported, some people have asked if President Donald Trump's conduct, such as some of his controversial tweets, directly contradict Trump's Be Best values about kindness and anti-bullying.

In March, CNN anchor Christi Paul asked Trump's spokeswoman, Stephanie Grisham, "How does she balance her platform against some of the things the president does?" The spokeswoman responded, "I think that, honestly, one thing doesn’t have anything to do with the other, and she is focused on helping children."

The one-year anniversary event could be a good time to see how much progress Trump's Be Best program has made and what its future goals are. It's likely that the White House will livestream the event on May 7. If you're interested, keep an eye open for updates on White House's official Live page.