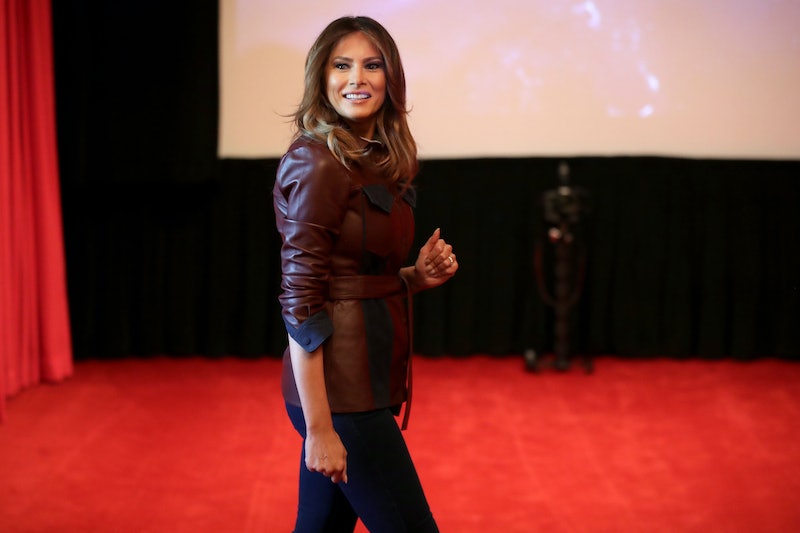 President Donald Trump is under fire for his recent comments about signing an executive order to end birthright citizenship. Melania Trump's immigration lawyer, Michael Wildes, is one of the many people who criticized the president for claiming that he has the power to do away with citizenship for people who were born in the U.S. to non-American parents, essentially in violation of the Constitution.

Wildes, who represented the first lady and her parents in their immigration dealings talked about Donald Trump's comments with CNN's Jake Tapper on Wednesday. Wildes dismissed the president's claims, saying, "Look, do I feel it meets muster? Absolutely not. This is again, a political ping pong that’s going to be bantered about in the next couple of days."

Tapper asked Wildes what would happen if Trump indeed decided to go forward with an executive order against birthright citizenship. "First of all, it's dead on arrival in a district federal court," Wildes said. "It's not going to an appeals court and it's not getting to the Supreme Court. That's just plain fact."

He said that that kind of executive order would not go anywhere once it "hits the court system."

"Look, the dialogue has deteriorated tremendously," Wildes said. "The notion of an anchor baby and the fear the president is instilling is just not factual. I have not seen in my 30 years of practice a woman coming in pregnant so that 21 years later a parent can then be sponsored by a child but only if that parent entered illegally and overstayed."

Wildes said that the American immigration system had legal mechanisms to address issues like that. "We shouldn't be playing to fears," he added. "This is just another political effort, unfortunately, where immigration is a ping pong."

Given the fact that Wildes has worked closely with Melania and her parents, some people may be surprised to see how little hesitation Wildes showed in criticizing Donald. But this is not the first time that the immigration lawyer made himself clear on Trump's various political stances.

In June, Wildes took on a similar critical tone while speaking of the current administration's approach toward border and immigration policy. The now-defunct family separation policy under Trump, which forced apart some 3,000 children from their parents, was another issue Wildes condemned. He lambasted the "inhumanity" of the practice.

"The inhumanity of what we see is reminiscent of detentions center of Nazi Germany, of the slave trade," Wildes said on Fox and Friends in June. "We can do better when we try to figure out this problem."

"Let’s not forget this problem needs to be fixed because the greatest risk takers and the greatest entrepreneurs historically have been immigrants in this country," Wildes said then.

It's natural if some people are alarmed by Trump's rhetoric on doing away with citizenship for the children of non-Americans or undocumented people. But as NPR's Joel Rose reported on Tuesday, legal scholars say that the president's executive order cannot simply override the 14th Amendment on birthright citizenship. It's much more complicated — and unlikely — than that.