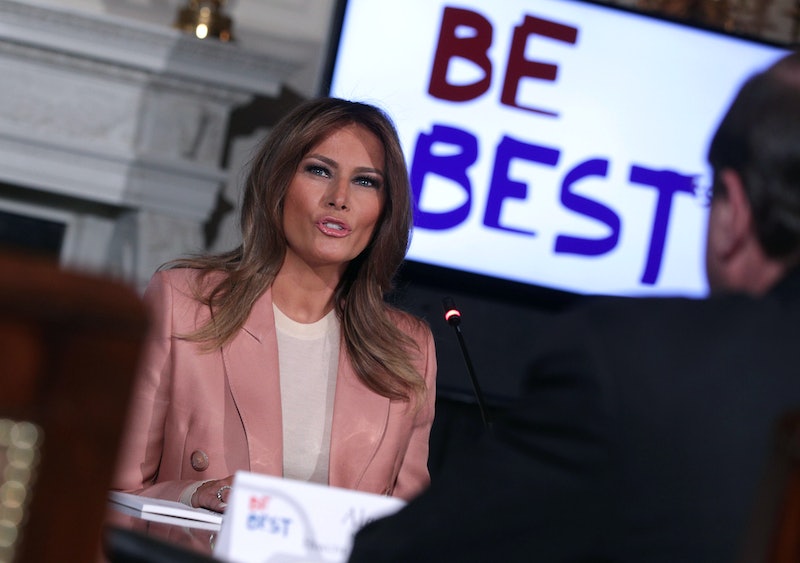 On Monday, the first lady held a meeting intended to help her learn more about various government-run youth programs. The programs discussed were intended to bolster Melania Trump's plans for Be Best, the children-oriented initiative she launched last May.

"My focus has and always will be on our children — the next generation," Trump said at the meeting, according to CSPAN video footage. "They’re our future doctors, nurses, firefighters, scientists, teachers, chefs, generals, pilots, designers, reporters, and missionaries, just to name a few."

Guests at the meeting — formally dubbed the Interagency Working Group on Youth Programs — included Housing and Urban Development (HUD) Secretary Ben Carson, Education Secretary Betsy DeVos, Health and Human Services (HHS) Secretary Alex Azar, and Matt Dummermuth, who heads the Department of Justice's (DOJ) Office of Justice Programs, among others. Each representative updated Trump on the work their agency or department is doing to promote at least one of Be Best's three key pillars: promoting child wellness, online safety, and opioid abuse prevention.

In recent months, the first lady has promoted Be Best both internationally and domestically. Trump told meeting participants on Monday that she wanted to learn about pre-existing programs so that leaders of the respective departments and agencies can collaborate to help empower children.

"There is always an opportunity to do more, and today’s meeting is a start," Trump said. "I will continue to use Be Best to highlight and promote the successful programs you and others are doing for children in America and around the world."

Topics discussed at the meeting included emergency preparedness, literacy, and signs of addiction, according to reports. It was not immediately clear whether any formal collaboration initiatives would result from the discussion.

"There is one goal to Be Best — and that is to educate children about the many issues they are facing today," Trump said at the initiative's launch, according to a White House transcript from the event. "If we truly listen to what our kids have to say, whether it be their concerns or ideas, adults can provide them the support and tools they need to grow up to be happy and productive adults who contribute positively to society and their global communities."

While traveling through parts of Africa last fall, the first lady participated in an interview with ABC's Tom Llamas, during which she touched, specifically, on the cyberbullying aspect of Be Best. During the interview, she said she believes she may be one of the most bullied people in the world.

"I could say that I'm the most bullied person in the world," she told Llamas during the widely-publicized interview. "One of them. If you really see what people are saying about me."

She continued, "That's why 'Be Best' is focusing on online behavior and social media. We need to educate the children [about] social, emotional behavior."

The bullying leg of Be Best has been subject to criticism, given the president's reputation for using the internet to disparage or argue with his opponents. (The White House has denied that the president has contributed to the prevalence of cyberbullying.) Still, Trump has continued promoting her initiative to a wide audience. Monday's meeting indicated that she plans to continue moving Be Best forward.