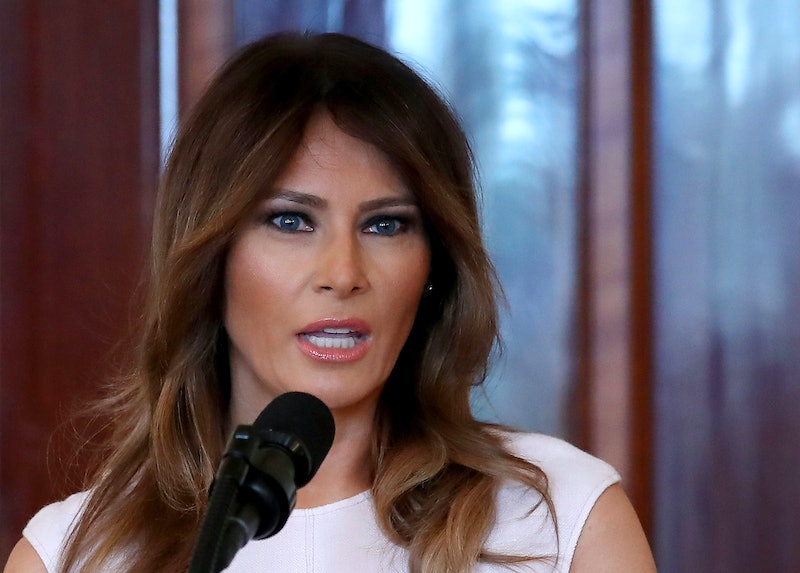 The first lady's first official remarks of 2018 were centered around guns — and around the student activists calling out her husband. Melania Trump's response to Parkland survivors came when she spoke to the spouses of U.S. governors on Monday, and she actually praised the student movement calling for gun control. "They are our future and they deserve a voice," she said.

Earlier this month, 17 students and staff members were killed at Marjory Stoneman Douglas High School in Parkland, Florida, when a lone gunman opened fire there. In the days since, survivors have kickstarted a heated conversation around American gun laws, organized nationwide school walkouts, told politicians their "thoughts and prayers" are B.S., and announced that they were "unimpressed" by a phone call from the president himself.

Despite Parkland survivors' criticisms of her husband, Melania Trump said she's proud of the teenagers speaking out about gun reform.

"In my year as first lady, I have also learned that it is often times after a tragedy that you see strength and resilience of the human spirit," she said. "I have been heartened to see children across this country using their voices to speak out and try to create change."

However, she didn't say anything about making changes to current gun laws; instead, she pivoted to her platform on curbing cyberbullying.

Three days after the Parkland shooting, the president blamed the FBI for the mass school shooting on Twitter and asserted that the agency is "spending too much time trying to prove Russian collusion with the Trump campaign." Parkland survivors didn't appreciate him using their tragedy to make a point about his campaignand implored him to keep his thoughts and prayers to himself. Survivors also criticized the president's calls to arm teachers in order to combat school shootings because they don't want teachers to worry about anything except their education.

Adding fuel to the fire, Stoneman Douglas students also called out the president for using a photo of himself visiting survivors in a campaign email asking for donations the day before the first lady praised the student movement. One student asserted that if he cared about Parkland survivors, he would have stayed at the hospital more than 20 minutes.

The first lady didn't mention her husband on Monday, but her comments about teenage activism were surprisingly positive, considering the negative feedback her husband has received since the shooting.

Her husband wasn't the only member of the family who was called out, either. Lauren Hogg, younger sister of prominent Parkland activist David Hogg, tweeted at FLOTUS that she should talk to her step-son if she wants to stop cyberbullying. She were referring to Donald Trump Jr., who had liked a tweet touting a conspiracy theory that their father — who happens to be a former FBI agent — was telling David to criticize the president.

Melania even spoke about the issue right after praising the gun control movement.

"It is important that as adults we take the lead and responsibility in helping our children manage the many issues they're facing today," she said. "This means encouraging positive habits with social media and technology."

She further stated that she believes "that if we all come together, we can start to affect positive change for our children and help prepare them for their futures."

Parkland survivors and other teenage activists want that future to include less school shooting and less access to dangerous firearms. The president, on the other hand, advocates for placing more guns in schools by arming trained teachers. Despite the fundamental disagreement — and the direct criticisms of herself and her husband — FLOTUS believes the teens deserve to be heard.

More like this
10 Times Boris Johnson Got It Wrong On Trans Rights
By El Hunt and Sam Ramsden
Michigan’s Governor Is “Going To Fight Like Hell” To Protect Abortion Access
By Andrea Zelinski
How The City Healed Five Years On From The Manchester Arena Attack
By Ella Glover
How To Fight For Reproductive Rights, Based On How Much Time You Have
By Courtney Young
Get Even More From Bustle — Sign Up For The Newsletter