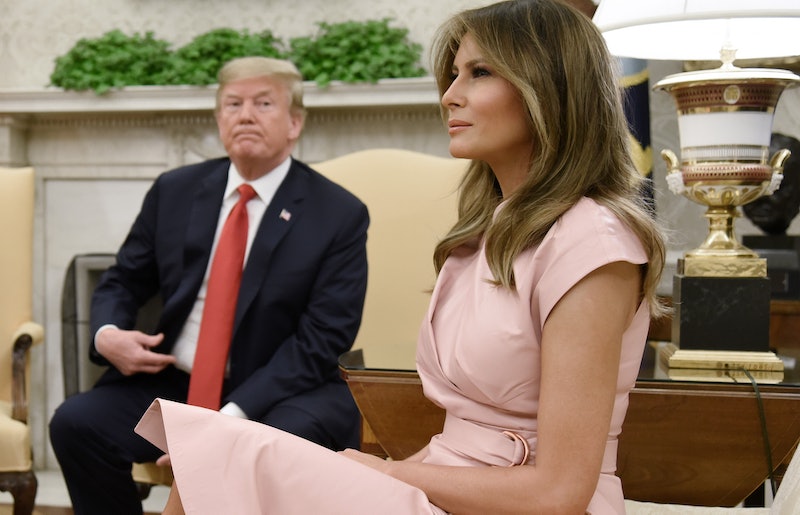 On Thursday evening, after a shooting left at least five people dead and many others injured, First Lady Melania Trump's response to the Capital Gazette shooting was a somber reflection of her husband Donald Trump's earlier comments. In a tweet, she primarily highlighted the tragic nature of the event, and then extended her condolences to the victims and families affected by it.

The tweet read in full, "Today's violence at the Capital Gazette was tragic & evil. My heart goes out to all affected in this brutal & senseless attack, & I send thoughts & prayers for comfort to the friends, family & colleagues of those killed & injured."

Earlier in the day, Trump tweeted a similar message: "Prior to departing Wisconsin, I was briefed on the shooting at Capital Gazette in Annapolis, Maryland. My thoughts and prayers are with the victims and their families. Thank you to all of the First Responders who are currently on the scene."

Though both of the Trumps' statements are appropriately sensitive to the horrific experience that many people had to live through on Wednesday, they are reminiscent of what many people view to be a massive problem: the focus on "thoughts and prayers" rather than action against gun violence.

The issuing of one's "thoughts and prayers" as a response to gun violence is incredibly standard — so standard that 2018 saw a rise of fury against the phrase, especially in the wake of how little has been done to prevent the rampant gun violence in the United States.

As Time's Katy Steinmetz explains, the repetition of the phrase "thoughts and prayers" has become a cliché of sorts, one of the first things a person might say as a form of condolence if they're really not sure what to say at all. While this can often be well-intentioned, many believe that it's become insidious, for one central reason: thoughts and prayers are not a form of action.

She continues, "Repeating the same language can even feed into the feeling that mass shootings are becoming normal and unworthy of deep, sustained attention, much less legislative action."

Put simply: given that there have been 154 mass shootings (shootings of three or more people at once) in 2018, which almost averages out to a mass shooting a day, people are sick and tired of thoughts and prayers. And they're taking to Twitter to talk about it.

In a variety of ways, people and organizations have taken to Twitter to point out the shortcomings of the "thoughts and prayers" response, and to point out more effective ways to combat gun violence.

The general consensus among many Twitter users is that the time for thoughts and prayers is over, and the time for careful voting has begun. The 2018 midterms are coming up, and one of the most commonly suggested strategies that was suggested on Twitter today was to vote out officials supported by the NRA or who otherwise have done nothing to speak out against gun violence and offer actionable steps to decrease it.

And according to a tweet by Elaine Godfrey, a politics writer for The Atlantic (as seen below), the Capital Gazette reporters might not be interested in all these thoughts and prayers, either.

If you're tired of hearing about an endless stream of horrific and senseless mass shootings, then the best thing that you can do is be incredibly educated on which politicians in your state are actively campaigning to end gun violence with actionable steps and proposed legislation. You can also support Every Town for Gun Safety and the March for Our Lives, two organizations that are working actively to push forth common sense gun control legislation.