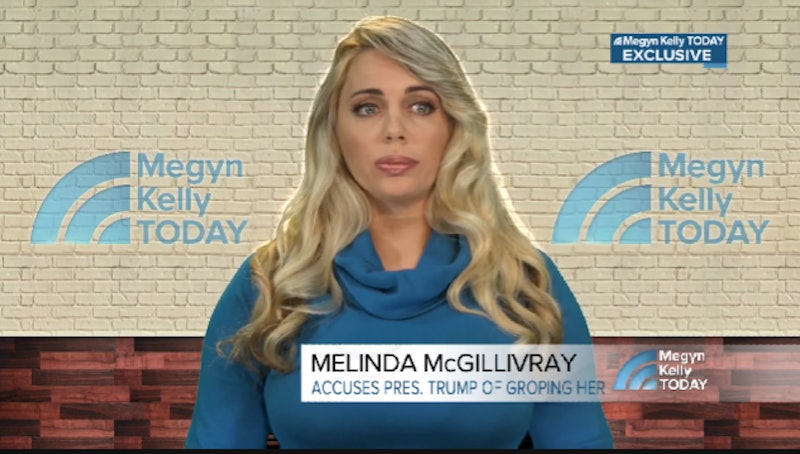 More than a year after multiple women came forward to accuse then-candidate, and now President Donald Trump of various forms of sexually predatory behavior, many of those same women are making a renewed push to hold him accountable. And on Tuesday, one of those accusers, Melinda McGillivray, called on Congress to investigate Trump for sexual misconduct, in an interview with Megyn Kelly of NBC News.

Trump, for his part, has strenuously and repeatedly denied all the allegations against him, calling his accusers "horrible liars," and maintaining that "the events never happened." That's also essentially the position of the White House, as Press Secretary Sarah Huckabee Sanders confirmed back in late October.

During the presidential campaign, amid the rush of accusations against Trump, McGillivray added her voice to the chorus, saying she was allegedly groped from behind by Trump at an event at his Mar-a-Lago estate in Florida in 2003. Specifically, she told Kelly she felt someone grab the right side of her butt, and upon turning around, saw Trump with a "look of guilt" that suggested it was him. Again, Trump has denied these accusations.

McGillivray was 23 years old at the time, accompanied by her then-friend, photographer Ken Davidoff. She told Kelly the reported experience made her feel "small and inferior," as well as "objectified."

I quickly turn to look at what this is, I initially think that this is probably Ken's camera bag, but to my surprise it's Donald. And he's standing a foot and a half away from me, so his hand had to reach out and touch me. I look at his face, and he's looking stone-cold, just stoic at Ray Charles, and I stand there, I'm stunned. I'm speechless, I don't even know what to do or say in that moment. ... I turn to look up at him, and he's just standing there, he didn't even acknowledge me. If he had accidentally nudged me he could've said "excuse me," but he said nothing, and I could see it in his face, the look of guilt.

McGillivray also says she ran into Trump during an earlier encounter in 2001 at a Huey Lewis and the News concert, and that she "felt like he was flirting." She then alleges that the current first lady ― then still Melania Knauss, not yet married to Trump ― walked past her to the bathroom, looking upset.

In perhaps the most emotional sequence of the interview, Kelly asked McGillivray how it felt to see Trump win the election despite her story, and those of all the other women who publicly accused him. Between long pauses, McGillivray described the feeling.

"Shock. I was, in dismay. I can't believe a guy like that could make it into the office, the highest office, and be revered as this leader," she said. "I can't look up to a man like that. I was disgraced. I think that we've got to have higher standards in this country, and we need to hold these people very accountable, he has to face the music, he can't get away with this. I demand that there's an investigation."

McGillivray is specifically calling for an ethics investigation against Trump. As of now, he's been accused of sexual misconduct by no less than 16 women.

"I demand that he be subjected to an investigation by the ethics committee. I think it's important that we hold this man to the highest standards. If 16 women have come forward, why hasn't anything been done?" McGillivray asked.

Where is our investigation? I want justice, I'm not happy ― listen, Donald is the tip of the iceberg, I've had this happen to me many times. But this is a powerful position, this is a powerful man, and I was scared, intimidated, hurt, I still feel the brunt of this situation, these circumstances. I have to fight to hold back tears.

McGillivray called 2017 "one of the roughest years of her life," saying through tears that she's speaking out for herself, and for her daughter.

McGillivray first went public last year after the release of the infamous Access Hollywood tape, in which Trump was recorded boasting about basically the same kinds of behavior he's subsequently been accused of by multiple women. Namely, that includes groping, kissing, and grabbing women's genitals without receiving consent.

Trump has also been willing to lob accusations of sexual misconduct at his political opponents, like resigning Democratic senator Al Franken, all while aggressively denying the multitude of claims against himself. He's also taken a very different tone when someone on his side has been accused ― he endorsed Alabama Republican Senate candidate Roy Moore this month, who's been accused of molesting a 14-year-old and sexually assaulting a 16-year-old, among many other allegations.

Moore forcefully denies the claims, characterizing them as politically motivated. Trump reportedly endorsed him enthusiastically this week, telling the 70-year-old former judge "go get 'em, Roy!" in a phone call from Air Force One.